Dwemeris was the main language and writing system of the Dwemer.[1] The language and writing system was based on Aldmeris.[2] Very little was known about Dwemeris, and was largely untranslatable, with the exception of a few specific words and passages, though the alphabet was known.[3] Many Dwemer documents were also written in Aldmeris, which made it easier for experts of Aldmeris to translate Dwemer documents and texts.[3] [4] Many examples of its writing system can be found in various books, and even some books were found that were written by the Dwemer themselves. Five notable books written in Dwemeris was The Egg of Time, Divine Metaphysics, Chronicles of Nchuleft, Nchunak's Fire and Faith, and Hanging Gardens.

The Dwemeris language utilized many runes that look like z's and d's in its form, and the writing system was written as the Dwemer's own form of runes and glyphs.

The Dwemeris script for letters primarily uses runes. The runes for the letters J, P, X, and Z are not known, but the rest of the alphabet is known (see below).

Calcelmo's Stone shows a large collection of both Falmer and Dwemeris runes.

An example of many Dwemer schematics, the Dwarven Crossbow Schematic. 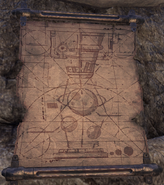 Dwarven schematic from Alik'r Desert
Add a photo to this gallery