For media allusion in other games, see Easter Eggs.

Easter eggs are pop culture references and other anecdotes that developers place into a game for players to find. None have any large direct impact on the game's progression. Some references revive nostalgic moments from previous The Elder Scrolls games, fill in plot holes from those games, or simply bridge together what has occurred between titles; others hint toward other video games, popular films, or troupes found across media types.

A Glass Shield in Oblivion, called "Mirror Shield," alludes to the Mirror Shield from The Legend of Zelda games by Nintendo. Both have the ability to reflect magic.

The Worn, Faded Note that is found during the Shrine of Azura quest "Azura" bears a few resemblances to the universe of Frank Herbert. For instance, it is written by Ghola gro-Muzgol. In the Dune series, a Ghola is a being brought back from the dead, just like the Afflicted Brethren are. Furthermore, the language used, such as We praise Her with the full fountain of our devotion, is very similar to the Fremen religion of the series.

The Thieves Guild quest "The Boots of Springheel Jak" has multiple references to the murderer Spring-heeled Jack, in the quest you ask Jakben Earl of Imbel's House of his boots, his name referring to "Jack be nimble." The fact that he is a vampire further references to "Jack the Ripper," a serial killer. Although it is more possible to be leaning towards the children's story:


Jack jump over the candlestick."

Alternatively, it could be a direct reference to the Spring-heeled Jack of English Victorian era legend, of whom many alleged sightings were made. Newspapers of the time reported him as a monster who used his abnormal jumping ability to attack his victims, or one or more nobleman in disguise playing pranks on the gullible public.

The diary that is stolen during the quest, "May the Best Thief Win," is an allusion to the film, Little Shop of Horrors.

In the ToddTest hidden area of Oblivion, there is a character there called Boromir. This is a reference to one of the characters in Lord of the Rings, played by Sean Bean, who is also the voice of Martin Septim.

After finishing the quest Unfriendly Competition, Thoronir gives you a ring called Weatherward Circlet, which has the same inscription as the One Ring.

A character mentioned in the Macabre Manifest is Oford Gabings. Oford Gabings is an anagram of Frodo Baggins, from Lord of the Rings. The items that he was carrying are those he is known to have carried throughout the series, depicted as follows:

A pair of ordinary shoes called the Blue Suede Shoes alludes the song of the same name written and performed by American recording artist, Carl Perkins. Later, the song was most notably covered by Elvis Presley.

During the quest "An Unexpected Voyage" when talking to Selene one of the options is to say "I am the ship's cook." The line and the premise of the quest parallel the movie, Under Siege starring Steven Seagal.

During the quest The Siren's Deception one of the women you fight is a Khajiit named Tsarrina.

In the second Redwall Book "Mossflower," the main villain was a female anthropomorphic wildcat named Tsarmina.

The book, Ten Commands: Nine Divines, is meant to be similar to the Ten Commandments.

There is a statue in Chorrol similar to Michaelangelo's Pieta sculpture, which depicts the Virgin Mary mourning over the corpse of Jesus.

Hermetic Order of the Golden DawnEdit

In Cheydinhal, in the Dark Brotherhood sanctuary, there is a character known as Antoinetta Marie, an allusion to the historical French Queen, Marie Antoinette.

M'aiq the Liar is a Khajiit in Oblivion who makes several references to the game itself. He talks in riddles, but makes quick explanations as to why or why not Bethesda did certain things in the game. An example is that he comments on the disputes over destructible environments, fighting on horseback, crossbows, and more. He also comments on the then-popular RPG, Fable, and its over-ratedness. M'aiq has appeared in Morrowind, Oblivion, and Skyrim. In Oblivion, M'aiq is first encountered near the Horse Whisperer Stables of Anvil county. Once dialogue is initiated with him twice, he flees toward Leyawiin.

In the Leyawiin Gate, on a large island unconnected to the other section of the realm, there is a door that cannot be opened. It is connected to an Ayleid Ruin.

There is a small bridge just past the Mouth of the Panther, east-southeast of Bravil. Underneath you will find the remains of a Dead Troll. Reminiscent of the children's fairy tale "Billy Goats Gruff," you will find A Poorly Scrawled Note on the body, explaining its failure as a bridge troll: "Mee wurst troll evurr nobuddy pay brijj tole me nott sceary enuf mee gett drunc an kil sellf troll droun." The location known as the Mouth of the Panther can be journeyed to during the quest "The Forlorn Watchman."

In the Imperial City Waterfront, there is a boat-inn runned by Ormil. If slept in the inn, a quest will start. In the aftermath of the quest, Ormil will explain that he invented a story of a treasure named "Golden Galleon" which is a reference to the English writer named "Saki" by his pseudonym (His real name was H.H Munro) Saki wrote a story named "A Holiday Task" in which the main character sleeps in an inn named "Golden Galleon."

Upon exiting dialogue, beggars may say "Blessings of Mystara upon ye." "Mystara" is never referenced in an Elder Scrolls game, but is instead a reference to Dungeons and Dragons' book "Mystara Campaign Guide." Todd Howard has said that Dungeons and Dragons was a great inspiration to him growing up.[1]

Secondly, in the Ayleid Ruin Vilverin, the player will find an Altar with an Undelivered letter written by a necromancer named Jalbert to a man named Aluc Cardius. This is a reference to Alucard, which not only is "Dracula" spelt backwards, but is also the half-human son of Dracula in the Castlevania games. It is also the name of the main protagonist of the anime Hellsing. 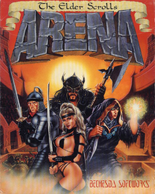 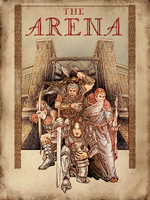 The promotional poster for the Imperial City's
Arena (right) mirrors the box art
for The Elder Scrolls: Arena (left).

The book The Warp in the West is a reference to the final quest in Daggerfall, where there were multiple possible endings.