For other uses, see Eastmarch.

"One of the "Old Holds," Eastmarch was among the first regions of Skyrim settled by the Nords when they arrived from Atmora. Its capital, Windhelm, is the oldest continuously inhabited human settlement in Tamriel, and was founded by Ysgramor himself."
―Eastmarch Loading Screen[src]

Eastmarch is one of the Nine Holds of Skyrim, located in the east of the province, and is one of the four oldest holds known collectively as the Old Holds. The zone shares a border with The Rift to the south, Morrowind to the east and Bleakrock Isle is located to the northeast of the hold, just off the coasts of Solstheim and Vvardenfell.

The zone stretches from Skyrim's jagged, northern Velothi Mountains and the frozen Sea of Ghosts into the southern volcanic tundra, which is inhabited only by a few hardy settlers, and formidable creatures, including giants, mammoths, trolls and even vampires. Locals sometimes exchange whispers about the dangerous menaces that stalk the land. Hot springs, giant camps and ruins are common throughout the south of Eastmarch while the north of the zone is much more civilized, thanks to the presence of the ancient city of Windhelm and the surrounding towns and villages.

Despite its size and importance, Eastmarch only has one major city, Windhelm, which sits at the mouth of the White River which flows out into the Sea of Ghosts. The Windhelm docks provides a vital link to trade with the rest of the Ebonheart Pact, and there are several small fishing fleets in operation. The Velothi Mountains, which span the entire eastern tip of Skyrim, create a natural border with Morrowind. The mountains are impassable, save for one pass outside of Fullhelm Fort north of Fort Virak in Stonefalls, that leads into and out of The Rift.

Eastmarch covers much of Skyrim's eastern border with Morrowind. The surrounding holds are Winterhold to the north, The Pale and Whiterun to the west and The Rift to the south.

Central Eastmarch is a volcanically active area, plains with steaming gas leaking in between cracks in the ground, colorful, mineral filled bodies of water, and geysers. The far west of the hold, a cold, snowy tundra, resembles much of the rest of northern Skyrim and the northern tundra is where the hold's capital Windhelm lies. The east is composed of the Velothi mountain range, which extends all the way down to Stonefalls in Morrowind.

There are 16 Skyshards in Eastmarch. 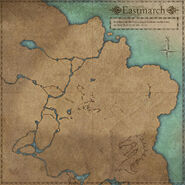 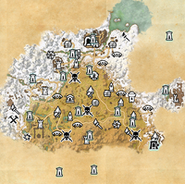 Retrieved from "https://elderscrolls.fandom.com/wiki/Eastmarch_(Online)?oldid=3095806"
*Disclosure: Some of the links above are affiliate links, meaning, at no additional cost to you, Fandom will earn a commission if you click through and make a purchase. Community content is available under CC-BY-SA unless otherwise noted.