"Before Ysgramor led the Nord people south, our ancestors flourished in the frozen continent of Atmora, and to this day our people prefer the bitter climates of northern Tamriel. The Dark Elves abide in Morrowind, a harsh land of ashfall and perpetual earthquakes. The Argonians endure the treacherous and impenetrable depths of Black Marsh. The alliance between our races was born in dark times, when Nord, Dunmer and free Argonians fought as one to repel the invasion of the Akaviri slavemasters. Our greatest strength is the adversity we have overcome. Our resolve is glacial, our might is forged in fire, and our courage, cultivated by the beasts of the jungle. We are Ebonheart. We are as one. And by this, our victory is assured."
―Blood For The Pact!, Jorunn the Skald-King[src]

The Ebonheart Pact is one of the three Alliances at the time of the Three Banners War. Its colors are red and black.

Tensions run deep between these unlikely allies, forced to stand together against the threat of Molag Bal and incursions from enemy alliances. The dour, magically-gifted Dunmer of Morrowind have joined the reptilian Argonians—former slaves from mysterious Black Marsh—and boisterous Nords of Skyrim in a bid for sovereignty.

Founded in the midst of the Akaviri Invasion of 2E 572, the territory of the Ebonheart Pact stretched over the provinces of Skyrim, Morrowind and Black Marsh at the height of its power. Its capital is the city of Mournhold, located on the mainland of Morrowind, the homeland of the Dunmer, though the faction is led by a Nord nobleman known as Jorunn the Skald-King.[UL 1]

One of the most politically unstable but militaristically powerful among the most powerful alliances of Tamrielic history, the three cultures that comprise the Ebonheart Pact shared a great distrust for each other, only holding allegiance to one another because of a common desire to defeat the Empire and preserve their homelands' independence.[UL 1]

After the sack of Windhelm and the death of Skyrim's royal family, the Akaviri began their march south towards the city of Riften. In grief and desperation, Jorunn, now the High King, approached The Greybeards for guidance. The Greybeards answered his plea, and called upon Wulfharth the Ash-King from Sovngarde for assistance. Inspired by Wulfharth, Jorunn's army of Nord warriors stood ready to confront the Akaviri invaders on their own terms.[UL 2]

Recognizing the regrouped Nords as the primary threat to their expedition in Tamriel, the Akaviri opted to avoid a second confrontation and marched directly for Morrowind, gambling the Nords would ignore them once they moved beyond Skyrim's borders. Jorunn's men pursued the Akaviri across the Velothi Mountains and forcibly pushed them into Morrowind. The Akaviri army was met by a Dunmer army led by the Tribunal Almalexia outside Ebonheart in the Stonefalls region. As the invaders engaged the Dunmer army, the Nords fell upon the Akaviri from the rear, but the invaders still outnumbered their foes. Suddenly, an Argonian army arrived from the south, led by Heita-Meen, a female Argonian, who had been shown the battle in a dream weeks before by the Hist and gathered an army to meet them. Surrounded on three sides, the Akaviri were forced north into the sea. There they either fell in combat or drowned as they fled into the water. This victory over the Akaviri forces played a crucial role in the later creation of the Ebonheart Pact.[UL 2]

Following the Akaviri defeat, the Nords, Dunmer and Argonians formed the Great Moot. The three cultures henceforth struck as a single army, ultimately repelling the entire invasion of the Akaviri slavemasters.[UL 1]

In 2E 579, the Ebonheart Pact controls the largest area of Tamriel's landmass out of the three alliances.[UL 3]

Despite the godlike power of the Dunmeri Tribunal, the faction was led by the High King of Skyrim. However, he did not rule absolutely. All governing decisions had to be brought up and discussed in the Great Moot to be approved.[UL 1]

The Great Moot is comprised of 3 members:

When the Great Moot assembled at Skuldafn after Pact forces defeated Fildgor Orcthane's army, each member presented an object of power before beginning the meeting. Jorunn Skald-King presented the Crown of Freydis, Yeveth Noramil presented the Judgement of Veloth, and Eyes-of-Steel presented the Mnemic Egg.

The following are the opening statements of the leaders at the beginning of the Moot at Skuldafn:

King Jorunn: Esteemed allies, I stand before my ancestors at this holy Dragon Shrine to seal our Pact for the greater good.
Eyes-of-Steel: I stand on this mountain to proclaim how far the Argonians have come from the swamps of Black Marsh. In the name of my people, I add my voice to form the Ebonheart Pact.
General Noramil: I represent the Dunmer and the Tribunal. I stand on this frigid rock to affirm our place in the Ebonheart Pact. I fervently hope we can move this along, because it's freezing up here.
King Jorunn: The Nords offer the Crown of Freydis. The symbol of power and wisdom provides the Pact with the strength and authority of our Nord ancestors.
General Noramil: The Dunmer offer the Judgement of Veloth, an artifact of ancient magic. This provides the Pact with our skills and the blessing of the Tribunal.
Eyes-of-Steel: The Argonians offer the Mnemic Egg, sacred symbol of birth and life, thus granting our wisdom, and the memories of the Hist, to the Pact. With these offerings the Pact is sealed. Let our nations become one!
General Noramil: Further, the Dunmer call for a single leader to hold this Pact together. We believe Skald-King Jorunn is the one to lead us.
King Jorunn: Let our enemies tremble at our combined might. I accept the role of High King of the Ebonheart Pact. We have much to discuss here. Please, champion, return to Jorunn's Stand and inform my son what has transpired here.

Jorunn the Skald-King was said to be humorous and inspiring, but also harbored an iron will. Despite the fact that the seat of power in Skyrim was the city of Windhelm, Jorunn spent most of his time in Mournhold where the rest of the Moot was represented.[UL 1][UL 4]

The leading race of the Ebonheart Pact. They were known as the great conquerors: Nords once broke the power of the Ayleids, drove the Snow Elves out of Skyrim, nearly drove the Altmer out of High Rock and ruled much of Morrowind before the arrival of the Dunmer.

They believe themselves to be the destined rulers of Tamriel. Nords are amongst the fiercest warriors on the continent, facing their enemies with unmatched ferocity and courage.[UL 1]

Their symbol is the Dragon, the great winged children of Akatosh who were once worshipped by the Nords and are the original users of the Thu'um which has been the greatest tool of war in Nordic history.

Known for their application of diplomacy, subterfuge and strategic ability, the Dunmer have had a long history of defending against provincial invasions. This had made them a very paranoid collective, and their culture learned to embrace this mind-set. The Dunmer are led by the living gods of the Tribunal.[UL 1]

Not all of the Dunmer agreed to set aside their old hatreds for the Argonians for the sake of the Ebonheart Pact, with House Telvanni being a prominent example.[UL 4] The Dunmer crest symbolizes the three members of the Tribunal.

Famous for employing guerrilla warfare, Argonians had suffered years of slavery at the hands of the Dunmer. After being freed from their slavery, their experiences made them skilled in defending their borders from much larger forces.

Known for their ability to survive underwater and their unique scavenger skills, Argonians served as the scouts and skirmishers of the Pact.[UL 1]

Soldiers of the Ebonheart Pact.

A Pact mage in bound armor.

Pact soldiers and mages guarding the Elder Scroll of Chim at the Chim Scroll Temple in Cyrodiil.

Pact mages standing guard at the Gate of Ghartok in Cyrodiil.

Fortifications at the Northern Morrowind Gate, heart of the Pact war effort in Cyrodiil. 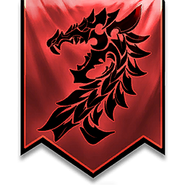 The Ebonheart Pact banner in The Elder Scrolls: Legends.

Notice: The following are unlicensed references. They are not copyrighted by a ZeniMax Media company, but can still be considered part of The Elder Scrolls lore and are included for completeness.
Čeština Deutsch Español Italiano 日本語 Polski Русский Українська
*Disclosure: Some of the links above are affiliate links, meaning, at no additional cost to you, Fandom will earn a commission if you click through and make a purchase. Community content is available under CC-BY-SA unless otherwise noted.
Advertisement