The Everscamp is a Daedra in the form of a staff with four little scamps dancing at the top. The bearer of this item is cursed to be followed around constantly by four scamps.

When the Hero talks to some of the townspeople about rumors in Leyawiin, he or she will learn about a woman named Rosentia Gallenus and how there is a terrible smell coming from her house. The Hero investigates and finds four scamps following her around. Upon talking to Rosentia, she will activate this quest, and relinquish the Staff of Everscamp (which cannot be dropped or sold) to the Hero.

After speaking with Alves Uvenim in the Mages Guild in Leyawiin, the Hero must go to Darkfathom Cave and find a subterranean Shrine of Sheogorath. This is where the Staff of the Everscamp must be left to complete the quest. 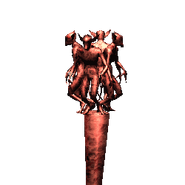 Staff Head
Add a photo to this gallery

Retrieved from "https://elderscrolls.fandom.com/wiki/Everscamp?oldid=3052076"
*Disclosure: Some of the links above are affiliate links, meaning, at no additional cost to you, Fandom will earn a commission if you click through and make a purchase. Community content is available under CC-BY-SA unless otherwise noted.