Northeast of the Water Stone

See below
Fahlbtharz is a Dwemer Ruin located in the mountainous northern region of the island of Solstheim. It is one of three Dwemer ruins located on the island.

Following the path will lead to a room with a Dwarven Sphere. Ten buttons in two rows of five can be found there, with the following effects labeled from one to ten:

Continuing the path leads to a platform entrance to a huge cavern with giant Dwemer gears spinning over a floor of water and high dwarven towers up ahead. Upon walking to the end of the right side of the platform, one can jump onto the gears. Some gears will have pipes in the center, where Dwarven Spiders will emerge. Continuing south leads the Dragonborn to the Corridor Room.

Going to the left will bring the Dragonborn to a small room, with two doors and multiple buttons. Behind the first door is a chest on the wall, and some scrap metal. To open the other door, press the second button from the right on the bottom row. Go through the gate and down a corridor with a chest in a room to the left. Continue until reaching a Tonal Resonator. Hitting the resonator will open the gate to the left. Proceed though the webbed corridors and defeat several Oil Spiders. Eventually, the Dragonborn will end up in a room with a gate. Looking a bit left and back down the corridor is another resonator hidden behind some webbing. Hitting that resonator will open this gate.

Continuing down the passage and through a door leads to a room with a planter filled with assorted fungi. Kill the several Animunculi here and pass through another door to the room of gears.

When going straight and staying on the gears, the Dragonborn may get to the other side of the room.

Passing through the gear mechanisms and going up the stairs leads to the body of a Nord adventurer named Eydis. Her journal explains she and her Dunmer companion, Ulyn, are searching for the Visage of Mzund. To find Ulyn's body, one must enter the Fahlbtharz boilery and go to the top floor of that room; his journal explains the boiler mechanism. There are six valves that must be shot, and each fills a different amount of lights in the center. One must shoot the correct valves to equal twenty lights. If more are triggered, the lights on the boiler mechanism turn orange and Dwemer automatons will appear to attack.

The valves hit will light the following number of lights:

Use a bow and arrow and shoot the valves. The only solution to the puzzle is to shoot the far left, middle on the left, and middle on the right valves. One may also use a Destruction spell such as Incinerate or Icy Spear to shoot the valves. If the resonators are hit incorrectly, the boiler will be overcharged, venting out steam and spawning hostile Dwarven automatons. Failing more than twice will result in three moving spinning blades being activated instead.

After going through the door that opens, one will find themselves back in the main cavern with the gears over water. There will be two leveled Dwarven Ballistas to eliminate. The second is over the bridge, and behind it is a chest with leveled loot. After defeating it, directly behind that across the bridge is a skeleton and a leveled bow. There is also another valve. To gain access to the Grand Hall, one must not hit it while standing on the same platform. Instead, one must go back to the rotating bridge and hit it with an arrow or magic. The bridge will then spin again, bringing the Dragonborn to the door to the Grand Hall.

To the left of the bridge, before entering the Grand Hall, below, there is a small rock outcrop. On it, there is a skeleton and an Expert level chest. It contains leveled loot. It should be noted that if one chooses to jump down to retrieve the chest contents, they will have to go back through the halls to reach the Grand Hall Door again.

It is possible to skip this whole process and go straight to the Grand Hall by using the Whirlwind Sprint shout and hopping along the edges of the bridges.

Once entering the Grand Hall, there are a couple albino spiders, an oil spider, and two more Ballistas. After clearing those, there are two leveled Dwarven Centurions (up to Masters) Killing them allows the retrieval of the Dynamo Cores to open the last door.

To finish, one may simply grab the helm and the piles of gold around it. There is also one of the five Kagrumez Resonance Gems on a plate. To exit, the lever must be pulled. Interestingly, the exit tower is not marked on the World Map, though other lifts, such as the Great Lift at Raldbthar in Skyrim, are. It is, however, marked on the Local Map as "Fahlbtharz Grand Hall." The closest location to it that the Dragonborn is able to fast travel to, without going through the underground location of Fahlbtharz, is the Abandoned Lodge south of the Fahlbtharz Grand Hall exit lift.

Alternatively, the Dragonborn can go back and grab all three Dynamo Cores, and retreat the way they came in, as the path is certainly easier going backwards than forwards and the cores are very valuable for crafting Daedric items at the Atronach Forge.

If timed correctly, it is also possible to obtain two of the cores by taking the core from the pedestal which controls the stairs and then taking the one that controls the spike gate. Then, the Dragonborn must quickly use Whirlwind Sprint and they will be in the treasure room with both and the spike gate blocking the path back.

Press the second to last button on the bottom row to open the door.

Place Centurion Dynamo Cores to open the closed off area.

Visage of Mzund and a Kagrumez Resonance Gem found here. 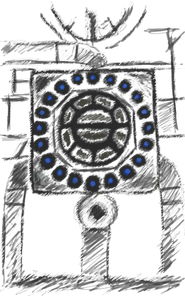 Retrieved from "https://elderscrolls.fandom.com/wiki/Fahlbtharz?oldid=3114789"
*Disclosure: Some of the links above are affiliate links, meaning, at no additional cost to you, Fandom will earn a commission if you click through and make a purchase. Community content is available under CC-BY-SA unless otherwise noted.