For the region the city is based in, see Falkreath Hold.

Falkreath, Falcrenth, or Falcreath is one of the nine major cities in Skyrim and the capital of Falkreath Hold. Falkreath is known for its death and melancholy themes, It is also the home of Skyrim's vast graveyards, holding the remains of many fallen warriors from as far as the Merethic Era to the Fourth Era. Falkreath is considered a part of the Colovian Estates.

Falkreath is situated on the southernmost roads in Skyrim and is not far the borders leading into the city of Elinhir in the Craglorn wastes, and the city of Bruma in the Jerall Mountains. Falkreath itself is a relatively small town compared to the likes of Windhelm or Solitude. In its prime, Falkreath was a well-guard stronghold that was able to withstand the Reachmen from the west and even the Orsimer of the besieged First Orsinium.[source?]

Falkreath generally has a straight path that goes through the city from the east and west. The middle of town is vast and houses a single water well in the middle. East of the Southern Gate leads up a hill to the Jarl's Longhouse, which overlooks the rest of the city. West of the Southern Gate leads into the Hall of the Dead, which goes deep into the ground, there is a chamber dedicated to Falkreath's founder, Bjarfrud Skjoralmor.[Notes 1]

"Many battles have been fought here over the centuries. Graves were dug and monuments built, and the town grew around these. In time, Falkreath came to be known as the heroes' graveyard. Many noble Jarls and renowned warriors asked to be buried here. Falkreath's reputation has faded somewhat, but the graves remain, reminding us of the one inevitable truth of life."
―Nenya, Steward of Falkreath[src]

The city of Falkreath was founded by Bjarfrud Skjoralmor, the origins of Falkreath is widely unknown, only told through legends passed down for generations. According to legend, Bjarfrud drove the dangerous beast out of the forest and chopped the trees down with ferocity. Falkreath was founded from the trees he had harvested. Eventually, he was crowned the first Jarl of Falkreath after driving out the beasts and building the city. His ancestors would rule for a very long time, even into the Interregnum and the Alliance War.[2]

The Kingdom of Western Skyrim and King Svartr[edit | edit source]

During the reign of the Akaviri Potentate, the province of Skyrim was ruled by High King Logrolf, who was a close ally of Versidue Shaie and was unfortunately assassinated around the same time in 2E 431. Eyes were looking towards Freydis, Logrolf's daughter, assuming she would become the next High Queen leading Skyrim into the future. Controversy would soon arise from the Kingdom of Solitude, when Jarl Svartr would claim that Freydis was illegitimate for the throne and that a moot was required to determine the new leader. The Moot had spoken, and the leaders of Skyrim voted for Svartr to become the High King. However, the Crown of Verity, the one that has chosen the High King for generations since Olaf One-Eye had chosen Freydis to become the High Queen. The province became divided, the Nords of the Old Holds followed Freydis while the Nords of West Skyrim followed Svartr. Skyrim had split into two separate kingdoms which would later affect the province for the next few years. The city of Falkreath, as well as the Falkreath Hold region, would join the Western Skyrim Kingdom.[3]

The War on Falkreath; Yashnag & the Orcs of Skyrim[edit | edit source]

The province of Skyrim has been inhabited by the Orsimer for several years, with strongholds ranging from the great fortress of Cradlecrush in Eastmarch to the rigged fort of Mor Khazgur in the Reach. With the Siege of Orsinium in 1E 980, many Orcish tribes scattered throughout the northwestern provinces including Skyrim and the Falkreath Hold. The Orcish Warrior named Yashnag gro-Yazgu traveled with his people across the Druadach Mountains to the forest of Western Falkreath, where they established a chiefdom under Yashnag. Yashnag's Chiefdom was a pox on the people of West Skyrim, causing strife on High King Svartr's Army and the people of Falkreath. Yashnag would eventually murder the Jarl of Falkreath during his conquest over the Hold. The Jarl's son, Hakkvild would seek out Yashnag for vengeance. Hakkvild challenged Yashnag in his home and defeated him in a battle of brawns. Hakkvild would become known as Yashnag-Slayer and would become the next Jarl of Falkreath. Yashnag's Chiefdom was burned down in 2E 467. The Orsimer would evacuate back into the Wrothgarian Mountains and the Second Orsinium would come to creation under the leadership of Kurog gro-Bagrakh.[4]

During the Interregnum in 2E 583, the city of Falkreath was under the rule of Jarl Hjurgol Skjoralmor, who coincided with the other regions in Western Skyrim, under the control of Jarl Svargrim. News would spread throughout the Hold about an impending invasion conjured by the Reachmen from the west. Hjurgol had denied the rumors, which proved to be his downfall. The Dreadhorn Clan would invade the city of Falkreath using powerful necromancy and the sheer force of the Minotaurs. The Dreadhorn Clan, under the administration of Domihaus the Bloody-Horned, would overwhelm the fortress city on all fronts and would raid the Hall of the Dead. Thane Eerika Skjoralmor would lead the defense against the Reachmen, but the siege had dwindled their numbers considerably. It was not until a mysterious traveler known as the Vestige, and their band of warriors arrived was when the battle shifted to Falkreath. Eerika led the remaining survivors to the Hall of the Dead, to evacuate them to a nearby settlement, ideally Dragonstar.[5][6]

The Vestige's entourage defeated the siege from the east, by slaying Morrigh Bullblood and their Siege Mammoth. By advancing into the central square, the group was able to kill a triad of necromancers and their hulking Bone Colossus named Cernunnon before reaching the Hall of the Dead. Jarl Hjurgol was residing in his Longhouse, located on the southern hill, overlooking his city as it was being besieged. When the Vestige and Eerika arrived into the Jarl's Hall, he would quickly be killed by Domihaus. The Vestige fought the Minotaur with ferocity. Domihaus was a master in both Destruction and Conjuration Magic, utilizing the Minotaurian Magma destruction magic as well as the elemental atronachs and the Stone Atronach. Eventually, Domihaus was defeated, and the city of Falkreath was saved. Eerika Skjoralmor would be named the Jarl of Falkreath soon after.[6]

Throughout the years, the continent of Tamriel has changed. The Alliance War had gone for several years; the power shifted in between the Alliances until the war ultimately gave way. The city of Falkreath was integrated into the Colovian Estates, a separate government consisting of the kingdoms of Colovia. The once proud kings of Colovia became Thief-Barons and forming forgotten covenants. The city of Falkreath was under the rule of King Cuhlecain, who envisioned a united Colovia under his reign but to do this, he needed to secure the Falkreath Hold border to the north, where Nords and Reachmen always fought. Cuhlecain amassed an army with his allies in Skyrim with his prized general, Hjalti Early-Beard leading the helm. Hjalti was a Nordic warrior from the island fiefdom of Alcaire in the Iliac Bay. Hjalti was a shrewd tactician and utilized an ancient art of Nordic Warfare known as the Thu'um to burst open the impenetrable gates of Old Hroldan. Hjalti would then be known as Talos and would unify the continent of Tamriel under the Septim Empire as Tiber Septim.[7][8]

During the Imperial Simulacrum from 3E 389 to 3E 399, Emperor Uriel Septim VII was imprisoned along with Talin Warhaft in the Deadlands by Jagar Tharn. Tharn planned for months to capture the throne, and he was able to achieve so in ten years. Tharn had a powerful weapon called the Staff of Chaos, and he split it into nine pieces and scattered them across Tamriel, the staff was the only thing keeping Uriel Septim and Warhaft in Oblivion. A warrior escaped his clutches and traveled all corners of Tamriel to retrieve the missing pieces. The hero was known as the Eternal Champion, and he assembled the staff and defeated Jagar Tharn at the Imperial Palace. The Eternal Champion had at one point visited the city in their quest to recover the pieces. The city of Falcrenth was under the rule of King Bjeld.[9]

During the Skyrim Civil War in 4E 201, the city of Falkreath was under the control of Jarl Siddgeir, who had recently inherited the throne from his uncle, Dengeir of Stuhn. During his reign, Siddgeir was aloof and had very little involvement in the politics of Falkreath. The one who was actually in charge was his steward, Nenya, who served Dengeir and the Jarls before him. Falkreath was in support of the Mede Empire during the Civil War, much to the dismay of Dengeir. The Imperial Legion under General Tullius were stationed in the Jarl's Longhouse with Legate Skulnar controlling the Falkreath Chapter. Dengeir is a staunch supporter of the Stormcloaks, a rebellious faction from the city of Windhelm, under the control of Ulfric Stormcloak. Dengeir believed that Siddgeir used his influence in the Imperial Legion to secure his role as the Jarl of Falkreath. However, Dengeir has been known to be quite the loon.[10]

The Jarl's Longhouse in Falkreath.

Falkreath's Graveyard is large as many died in the surrounding areas.

The Temple of Arkay seen in Falkreath. 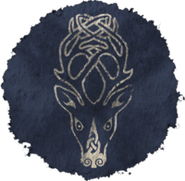 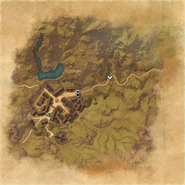 Map of Falkreath, as it appears in Online.

Falkreath from the northwest during the Fourth Era.
Add a photo to this gallery

Retrieved from "https://elderscrolls.fandom.com/wiki/Falkreath?oldid=3123001"
*Disclosure: Some of the links above are affiliate links, meaning, at no additional cost to you, Fandom will earn a commission if you click through and make a purchase. Community content is available under CC-BY-SA unless otherwise noted.