For other uses, see Falkreath.

It is famous for its large graveyard, in which many Nords, both combatants and non-combatants, are buried.

The city lies in a valley near the center of the Falkreath Hold, in the low-lying forest area some distance west of Helgen. Like many of Skyrim's woodland settlements, Falkreath's economy is heavily reliant on the production of lumber.[1] It is one of the smaller major cities, with no real walls surrounding it and no large buildings. The town is far more similar to a small farming village rather than a major city. The Hammerfell border can be accessed by road a short walk west of the city.

The graveyard of Falkreath contains many famous Nords who requested to be buried in Falkreath, next to the other honored dead of past battles. Since they were constantly living alongside the dead, the people of Falkreath gave many of their shops and other buildings names related to death. As told by the residents, Falkreath was the place of many battles in the past, being the main reason for the large graveyard. 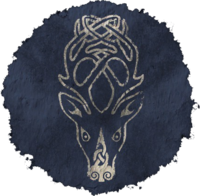 Early Nords, called, Men-of-'Kreath, were a tribe mentioned in The Adabal-a that migrated from Atmora to Skyrim, as the Nedes moved to the ice island from Tamriel.[2] While part of the Colovian conglomerate, the Men-of-'Kreath were an independent tribe on their own; it is also possible that the Colovians too were a group of separate tribes who later found the kingdoms of Chorrol, Skingrad, Kvatch and Anvil, before the unification of Cyrodiil.[2] Thus, they were most likely a North Colovian tribe living in the area of modern Falkreath. This is likely, as Falkreath has been historically considered a part of Colovia, not Skyrim.[2] The Men-of-'Kreath evidently spoke a Colovian dialect unique from the other tribes, believed to contain some Aldmeris words. But, many Nedic tribes, especially in Cyrodiil and Hammerfell, were enslaved by the Ayleids.[2]

During the time of Tiber Septim and the Underking, Cuhlecain, the King of Falkreath in West Cyrodiil, was in a bad situation. To make any bid at unifying the Colovian Estates, he needed to secure his northern border, where the Nords and Reachmen had been fighting for centuries. He allied with Skyrim at the Battle of Old Hrol'dan. Leading his forces was Hjalti Early-Beard. Hjalti was from the island kingdom of Alcaire, in High Rock, and would become Tiber Septim, the First Emperor of Tamriel.[3]

Due to the high likelihood of dragon attacks curbing the civilian population of Falkreath and the seemingly random nature of several quests occurring in Falkreath, quests which satisfy the "assist the people of Falkreath" element of becoming Thane, can be difficult to come by or complete. It is worth knowing that taking Falkreath in the Civil War (at least for the Stormcloaks) counts as one of the three quests. Harvesting crops for Mathies, selling firewood to Hert at Half-Moon Mill, and investing in stores all count towards three assists.

Falkreath on the world map
Add a photo to this gallery

Retrieved from "https://elderscrolls.fandom.com/wiki/Falkreath_(Skyrim)?oldid=3085003"
*Disclosure: Some of the links above are affiliate links, meaning, at no additional cost to you, Fandom will earn a commission if you click through and make a purchase. Community content is available under CC-BY-SA unless otherwise noted.