Lesser or Common, depending on subtype

For other uses, see Falmer.

"The Falmer are twisted, evil creatures that dwell in Skyrim's deepest reaches. They have but one desire - to destroy the surface world, and any who dwell above."
―Loading Screens (Skyrim)[src]

The Falmer are creatures that appear in The Elder Scrolls V: Skyrim. They are a race of Mer formerly known as Snow Elves, who have devolved into primitive creatures inhabiting the dark underground and remote areas of Skyrim.

The Falmer are blind but have a stronger sense of hearing and smell than many other creatures, which means Falmer can detect the Dragonborn even if they use Invisibility. Muffle and a high Sneak level work much better. For a low level Dragonborn, it is advised to use a bow and shoot them at a distance.

There are several different types of Falmer, from the basic foot soldier to the considerably more powerful Warmonger. All types, however, possess extremely sensitive hearing and will investigate even the slightest noise without hesitation. Some Falmer are mages who mainly specialize in frost and shock spells and can also cast healing spells.

Falmer are known to carry weapons and armor they craft. Falmer craft a full range of weapons such as swords, war axes, bows, and arrows. Higher-level individuals may carry the honed version of the edged weapons. They also carry Falmer shields and helmets, which seem to be made from Chaurus chitin. Full Falmer armor exists, however there is only one known set, which is located within the depths of Mzinchaleft ruins. In addition, Falmer carry poison,

Falmer helmets are especially valuable as they may be worn along with a circlet. Any enchantments on both will have full effect, allowing the production of stronger potions, for instance.

Chaurus Chitin can be harvested from Chaurus and Chaurus Reapers, as well as Chaurus Hunters, which is used to upgrade Falmer weapons as well as Falmer armor along with Falmer heavy armors.

Sneaking is very effective against Falmer, as they are completely blind and light will not be a factor. Carrying a torch too close to them, however, may catch their attention due to the sound and heat. If the Dragonborn can move silently while sneaking, they are effectively rendered invisible to the Falmer. This means that Muffle will be more useful than the spell Invisibility against the Falmer. An accomplished archer can be a Falmer's worst nightmare, as Falmer cannot possibly detect them from a distance. However, repeated misses with projectiles can reveal the archer's location remarkably quickly.

Falmer live strictly underground in caves and Dwarven ruins. They do, however, make forays to the surface.

Concept art of a group of Falmer 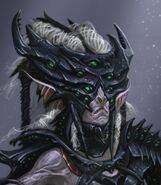