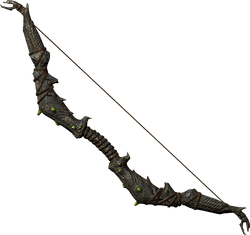 Falmer Weapons are a special set of weapons found in The Elder Scrolls V: Skyrim.

Falmer weapons are crafted by the Falmer from chaurus chitin, which they harvest from their domesticated Chaurus, and appear to be shaped with embalming tools. Falmer weapons are found exclusively on Falmer and in areas where they are present, and are not sold by merchants. The weapons have a very primitive appearance, and resemble insect limbs.

Like Ancient Nord Weapons, the Falmer Weapons do not include daggers; maces can be found in the game, but they cannot be picked up. They are most easily found inside the Dwemer Museum and can (very rarely) be found in Falmer lairs in Dwemer Ruin. Additionally, there are no Falmer greatswords, warhammers or battleaxes.

These weapons have a better base damage than steel weapons, but are noticeably heavier. The weight of the Falmer War Axe being one of the three heaviest one-handed weapons in the game, the Dragonbone War Axe being equal in weight. Both weapons being beat by only the Dragonbone Mace in terms of weight, making it the heaviest one-handed weapon at 22 pounds.

The Falmer Supple Bow and Dragonbone Bow are matched in terms of weight and are among the heaviest Archery weapons in the game, only being second behind the Enhanced Dwarven Crossbow at 21 pounds.

Falmer weapons cannot be crafted, but they can be improved using a grindstone and a piece of Chaurus chitin. Supple Falmer bows and honed Falmer swords and axes cannot be upgraded by the Dragonborn.