For other uses, see Fanacas.

A large portion of this Ayleid ruin is flooded. It is home to a small group of vampires, known as the Manifesto Cyrodiil Vampyrum. As in all Ayleid ruins there are a number of Ayleid chests with minor loot such as

, potions, scrolls and some soul gems.

Lord Umbacano of the Umbacano Manor in the Talos Plaza District is a collector of rare Ayleid antiquities.

As soon as the Hero exits the Imperial Prison Sewers from the beginning of the game, there will be an Ayleid ruin named Vilverin directly ahead, exploring deep enough into the ruin or another one listed below, they'll find an Ancient Ayleid Statue. 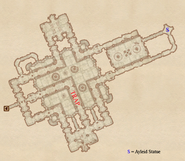 Fanacas Map
Add a photo to this gallery

Retrieved from "https://elderscrolls.fandom.com/wiki/Fanacas_(Oblivion)?oldid=2832760"
*Disclosure: Some of the links above are affiliate links, meaning, at no additional cost to you, Fandom will earn a commission if you click through and make a purchase. Community content is available under CC-BY-SA unless otherwise noted.