For the book, see Arkngthamz-Phng (Book).

"It is said that Fang Lair was originally built by the Dwarves of Kragen. Legend has it that a Great Wyrm drove the Dwarves from their home in the Dragon's Teeth, and took the Lair for itself. I only wish I knew the exact location."
―Ria Silmane[src]

Fang Lair is located in the Dragon's Teeth Mountains, a mountain range which encompasses the other mountains from High Rock to Valenwood (although based on the map, Fang Lair is built on the Druadach Mountains in the Hammerfell side). The Dwarves of Kragen had used Fang Lair to excavate various minerals including Gold and Mithril, the latter being a very scarce and versatile material. Fang Lair descends far into the ground, the second level has pools of lava, that the Dwarves have most likely used for their smithing and mining. The area around Fang Lair is infamously known as wild country, with tricky canyons and hidden valleys. The Dwarves had built a castle above the mines of Fang Lair, with narrow towers and arched bridges. There is a large gate in front of Fang Lair, with a stone dragon perched over it. The entrance was massive, but the doors had disappeared. Down the main hall is a balcony, which looms over an open pit, presumably the beginning of the mine.[1]

The Dwarves of the Rourken Clan had yearned to leave from the province of Morrowind, desiring to build beyond the province. It is because of the Rourken Clan; there are various Dwarven Cities throughout Hammerfell and the Abecean Sea. Rourken Clan had created a trail which caused the Dwarves of Kragen to follow the Rourken Dwemer to the western desert and built their settlements, with Arkngthamz-Phng being one of them. Before this city was built in the Dragon's Teeth, the Kragen Clan had created the Dwarven city-state of Arkngthamz, located in the Reach of Skyrim. Arkngthamz inspired more Dwarven clans in Morrowind to expand to the west, in Skyrim and Hammerfell. Arkngthamz was built for mining Aetherium, a powerful mineral with magicka properties. Because of this, Arkngthamz allied with other Dwarven city-states (i.e. Mzulft and Irkngthand). Eventually, the Kragen Clan moved into Hammerfell, in the Dragon's Teeth Mountains, where they established Arkngthamz-Phng. The city-state of Arkngthamz-Phng would prosper amidst the Dragon's Teeth.[2][3]

On one fateful day, the Dragon known as Thurvokun had fled the province of Skyrim several years prior, and eventually found Arkngthamz-Phng. With his immense power, Thurvokun had driven the Kragen Clan out of Arkngthamz-Phng, claiming the ancient Dwarven city as his nest. Because of living in the city, the ruins were renamed into Fang Lair, known for being a Dragon Lair. Before living in Fang Lair, Thurvokun was prominent during the Dragon War. Instead of choosing a side, he remained neutral and fled his Dragon Cult. Because he was not given an eternal soul, he was slowly dying of age. In the late first era, an Altmeri warrior named Caluurion had traveled to Fang Lair with his three companions, Ulfnor and Sabina Cedus, to subdue the beast. It was at this point, Emperor Reman Cyrodiil had already called an end to hunting Dragons. In the end, both Thurvokun and the three companions were killed, with their remains staying in Fang Lair, untempered for years.[2][4]

During the Interregnum in 2E 583, the tale of Fang Lair had faded to obscurity, beckoning the typical adventurer to seek the ruin's treasures. The Blackmarrow group of necromancers had traveled to the ruins of Fang Lair, to seek the remains of Thurvokun. The leader of the Blackmarrow, Orryn the Black had resurrected the corpse of Thurvokun, which had lost the flesh, leaving nothing but the bones. The Blackmarrow had revealed themselves to the world, posing a serious threat to the people of Tamriel. This prompted the Undaunted to take action, to deal with the threat. The Undaunted had sent Yisareh to the Dragon's Teeth Mountains, where she encountered the Blackmarrow. The power of the necromancers was too much for Yisareh, so she utilized the help of a group of adventurers, led by a mysterious warrior. The warriors had defeated the Blackmarrow, all throughout the dungeon, eventually defeating Orryn the Black, who had used the skeletal dragon, Thurvokun. The Blackmarrow was dealt with and the threat was vanquished.[5]

During the Imperial Simulacrum from 3E 389 to 3E 399, Emperor Uriel Septim VII was imprisoned along with Talin Warhaft in the Deadlands by Jagar Tharn. Tharn planned for months to capture the throne, and he was able to achieve so in the span of ten years. Tharn had a powerful weapon called the Staff of Chaos, and he split it into nine pieces and scattered them across Tamriel, the staff was the only thing keeping Uriel Septim and Warhaft in Oblivion. A warrior escaped his clutches and traveled all corners of Tamriel to retrieve the missing pieces. The hero was known as the Eternal Champion, and he assembled the staff and defeated Jagar Tharn at the Imperial Palace. The Eternal Champion had at one point visited the ruins of Fang Lair in their quest to recover the pieces.[6]

The Eternal Champion had escaped the Imperial Dungeons through a magical portal, dropping them somewhere in Tamriel. In their sleep, Ria Silmane came to the warrior through a dream, giving them the quest to reassemble the Staff of Chaos and to begin their search in the province of Hammerfell with Fang Lair. The Champion had then traveled to the city-state of Rihad, to get an idea on Fang Lair's location, and was directed to Queen Blubamka, the leader of Rihad. Before they were given the whereabouts of Fang Lair, the Queen gave the Champion a proposition: if they retrieved a parchment from Golthog of Stonekeep, then she will give them what they need. And so, the Champion was able to get the coordinates for Fang Lair and retrieve the first piece of the Staff of Chaos. The Champion would then set their sites for the province of Skyrim.[7][8] 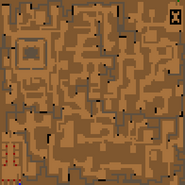 First Level of the mine. 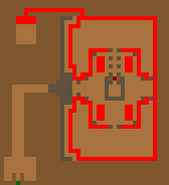 Second Level in the mine.

A shrine within Fang Lair.

Fang Lair in Hammerfell.
Add a photo to this gallery

Retrieved from "https://elderscrolls.fandom.com/wiki/Fang_Lair?oldid=3122121"
*Disclosure: Some of the links above are affiliate links, meaning, at no additional cost to you, Fandom will earn a commission if you click through and make a purchase. Community content is available under CC-BY-SA unless otherwise noted.