Fathis Aren's Tower is a location in The Elder Scrolls IV: Oblivion.

Fathis Aren's Tower, also known as Bravil Wizard's Tower or Temple of the Emperor Zero, is an old fort inhabited by Mages Guild member Fathis Aren. The ruin runs deep underground and is actually connected to Castle Bravil via the Lord's Manor North Wing (Fathis's room in the castle). At the bottom of Niben Bay lies a secret entrance that comes up through the lair of the Giant Slaughterfish and into the Bravil Wizard's Grotto.

This tower is the destination of the Thieves Guild quest "Arrow of Extrication." 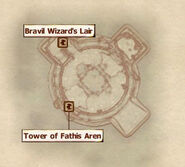 Bravil Wizard's Grotto
Add a photo to this gallery

Retrieved from "https://elderscrolls.fandom.com/wiki/Fathis_Aren%27s_Tower?oldid=2953697"
Community content is available under CC-BY-SA unless otherwise noted.