Reman Empire
Septim Empire
The Fighters Guild, originally founded as the Syffim (Tsaesci: Soldiers),[1] is a professional organization chartered by the Emperor in order to regulate the hiring and training of mercenaries and skilled warriors in Tamriel. The guild was founded in the year 2E 320 by Dinieras-Ves under the supervision of the Akaviri Potentate of the Reman Empire, Versidue-Shaie. Shortly after its establishment, it became the official mercenaries guild that citizens from all walks of life in Tamriel depended on for protection and combat assistance.[1] The Fighters Guild will accept almost any contract. Contracts pertaining to the killing of infestations of rats, eliminating troublesome bandits, delivering packages, and escorting high-ranking nobles are all suitable jobs for a member of the Fighters Guild.

For more specific information, please refer to one of the following:

"The Fighters Guild is a brotherhood of warriors. We provide a service to Tamriel, lending steel and shield to those who need our help. Whether that means ridding a town of an invading menace or protecting a helpless mage, we'll take the contract."
―Master Vilena Donton[src]

After the Potentate Versidue-Shaie conquered the rebelling princes, he was left with a chaotic land. He had spent the last of his armies and gold fighting the princes, and with no standing army left to guard the towns and villages, crime everywhere had skyrocketed. A solution was created when Dinieras-Ves "The Iron" suggested the creation of an order of mercantile warriors-for-hire. Originally called The Syffim, after the Tsaesci word for 'soldiers,' it was eventually changed to Fighters Guild. It was to be comprised of only Akaviri soldiers, but many men were needed, and the Tsaesci didn't understand the local geography and politics of where they were assigned, so natives were often recruited.[1]

Sometime prior to 2E 582, then guildmaster Jofnir Iceblade was killed under mysterious circumstances. During the Planemeld, under his successor Guildmaster Sees-All-Colors, the Guild worked actively to assist in thwarting Molag Bal's invasion of Nirn. Originally investigating Dark Anchors, the guild recovered an Ayleid artifact known as the Prismatic Crystal from Mzeneldt, which was initially hidden as it provided the source of power for the Mortuum Vivicus. Aelif, a traitor of the guild working under Bal, attempted to manipulate the Vestige into killing Colors after framing her for Iceblade's murder. The Vestige later decided to believe Colors, causing Aelif to reveal her true intentions and used the Vivicus in order to transform herself as a Daedric Titan. The Guild defeated Aelif, with Jofnir's spirit giving the Vestige the Prismatic Weapon and going to Sovngarde.[2]

During the allied invasion of Coldharbour, the Fighters Guild, along with the Mages Guild, First Aldmeri Dominion, Daggerfall Covenant, and Ebonheart Pact, entered the realm from Stirk. With no global leader, the long-imprisoned Ayleid king, Laloriaran Dynar, took up the title of leader. A master tactician and strategist, Dynar led the assault all the way towards Heart's Grief, and used knowledge of a captured guildhall in the Reaver Citadel to maneuver the armies through the Fist of Stone. Dynar was mortally wounded defending the army from a Daedric attack, and entrusted the Vestige with a gift in his dying moments.[2]

The Fighters Guild gained greater prominence during the early Third Era under Emperor Uriel I.[3] In 3E 397, the guild maintained a hall in Skyrim-occupied Western Dragonstar, led by Dominus.[4] In 3E 405, the guild also operated in many locations around Iliac Bay. Many of their missions involved defeating harmful creatures, though their most important one involved saving spy Lord K'avar.[5]

In 3E 427, the Fighters Guild in Morrowind was suffering from corruption in Vivec City, causing many to worry about the direction the guild was taking. As a result, the corrupt leader Sjoring Hard-Heart, who was in league with the Camonna Tong, was executed by the Nerevarine. They also sought out the deaths of high-ranking members of the Thieves Guild, including their guildmaster Gentleman Jim Stacey.

In 3E 433, the Cyrodiil fighters guild mainly operated in Anvil, Cheydinhal, and Chorrol. They looked into the dealings of the rival Blackwood Company, another mercenary guild situated in Leyawiin that would take jobs the Fighters Guild would not.[6] With the help of their recruit, the Hero of Kvatch, the guild infiltrated the Blackwood Company and discovered they were harvesting Hist Sap from the Hist trees. Modryn Oreyn ordered the execution of all members of the company and had the Hero destroyed the pumps of the hist tree, effectively eliminating their rivals in the province.

Despite having operating guildhalls in Shor's Stone, Riften, and Windhelm during the Second Era,[2] the Fighters Guild's presence was no longer in Skyrim by the Fourth Era,[7] with The Companions becoming the primary mercenary guild in the province.[8] 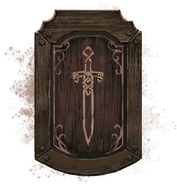 Real-world banner of the guild

Español Italiano Русский Türkçe Українська
*Disclosure: Some of the links above are affiliate links, meaning, at no additional cost to you, Fandom will earn a commission if you click through and make a purchase. Community content is available under CC-BY-SA unless otherwise noted.
Advertisement