Finding the Flask of Lillandril

"No. Poor Iszara. No patience. Joto tells her -- Flask of Lillandril, old, old elven magic, here on this island -- But where? Flask is lost many, many years, so we search and search, but -- few clues, so slow, Iszara can't wait. We find one thing, one piece of map, I think it shows where to look, but just one piece --"
―Joto[src]

Finding the Flask of Lillandril is the sixth quest in the main questline in The Elder Scrolls Adventures: Redguard.

Cyrus needs to find the Flask of Lillandril in order to combat N'Gasta's magic. He first must find the four pieces of the map.

Although the quest officially begins after speaking to Joto, Cyrus can begin acquiring the other pieces before hand. In fact, the insignia Cyrus acquired for the quest Meeting the Restless League secretly contains another piece of the map on the back of it.

After learning that Iszara took the soul gem of prince A'Tor from the League's hideout from Basil, Cyrus can ask around town about it. The bosmer apprentice and shopkeeper Falicia of the Mages Guild, who previously denied knowledge of Cyrus's sister, confesses that she came into the guild with the soul gem and was assisted by a fellow guild member Joto. However, she has disappeared and the acolyte was thrown into the City Jail. Soon after Arch-Mage Jaganvir appears and attempts to silence Cyrus by transforming him into a gremlin. For more details, see the quest "Saving Iszara". After acquiring a piece of the map from Joto and escaping the Old Quarter, Cyrus can set about finding the other pieces.

Speaking to Gerrick, he will mention Trithik is more knowledgeable about the fabled treasure. Alternatively, speaking to Dreekius will reveal that Crendal openly and drunkenly brags about having a piece of the map in his possession. Whatever course is taken, speaking to Crendal confirms this and reiterates that he stole it from Triththik. By speaking to Trithik and getting him to describe the maps's contents, Cyrus can trick Credal into revealing the maps location with Trithik's description of the map piece. Crendal will make his way to the hiding spot, located in the city Park near Gerrick's Goods. Using the shovel, Cyrus can then retrieve the leather poach that contains it.

To get the cartographer's map, Cyrus must first go to J'ffer's Books and buy Elven Artifacts and then ask Maiko to make a map from the books coordinates and notations. Frustrated by repeated previous requests to do this very thing, Maiko will only agree to make it if he's given the book so there will be one less copy around. After sometime has passed, Cyrus may return and be given the map.

If spoken to before about the flask, Falicia will mention that a silver boat supposedly contains a piece of the map. When Cyrus speaks to the local Silversmith, the owner Krisandra claims to have no such piece in her possession. However, across the street from her shop her house has noticeably been ransacked and entering reveals it perpetrators are Imperial guards. Facing off against them, Cyrus can return to Krisandra and she will offer the storeroom key where everything the previous owner kept, indigent that the Imperials would have done such a thing to a loyal Forebear. After climbing some boxes, in the very back of the room is the chest containing the silver boat. Turning it upside down reveals that it does in fact contain a piece of the map on it's underside.

With all pieces combined, Cyrus can head to Saintsport. The notation "Leki" refers to the towns wayshrine, with a mural of Leki on it's ceiling with her hand pointing west. Altogether, the rout is 63 paces west and 16 paces south. The "Long Tree" is a red-herring, as no such tree exists. The chest is located on down the sandy slope roughly near the entrance to Saintsport. Using the shovel, Cyrus can unearth the chest containing the flask, now fully prepared to face off against the necromancer N'Gasta. 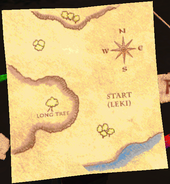 The cartographer's map made by Maiko giving Cyrus a general idea where to begin his search. 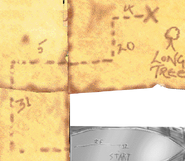 The Saintsport wayshrine's mural of Leki.
Add a photo to this gallery

Retrieved from "https://elderscrolls.fandom.com/wiki/Finding_the_Flask_of_Lillandril?oldid=3067918"
*Disclosure: Some of the links above are affiliate links, meaning, at no additional cost to you, Fandom will earn a commission if you click through and make a purchase. Community content is available under CC-BY-SA unless otherwise noted.