Fine Clothes are an article of clothing found in The Elder Scrolls V: Skyrim.

This outfit is mainly found in dressers in houses of the wealthy or on the people themselves. This outfit offers no protection as armor, but the relatively high (for clothing) weight:value ratio makes it worth collecting for the purposes of trade. 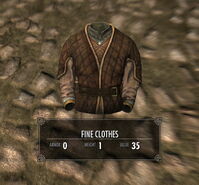 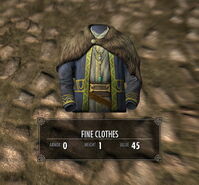 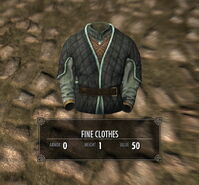 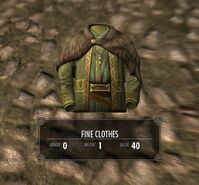 Fine Clothes ID 00086991
Add a photo to this gallery
Retrieved from "https://elderscrolls.fandom.com/wiki/Fine_Clothes?oldid=3064908"
*Disclosure: Some of the links above are affiliate links, meaning, at no additional cost to you, Fandom will earn a commission if you click through and make a purchase. Community content is available under CC-BY-SA unless otherwise noted.