Immunity to weapons below Mithril; Resistance to Fire Damage; Immunity to Invisibility

"These creatures are from the netherworld, often gating themselves into our plane of existence on some errand of their choosing. They are dangerous foes, highly intelligent, completely chaotic in nature, and powerful in the ways of magic. Often they are very resistant to fire, and are subject to attack only by special weapons. They are very dangerous to face. Fire daemons also have the ability to see invisible creatures."
―Arena Player's Guide[src]

Fire Daemon is a creature encountered in The Elder Scrolls: Arena.

Fire Daemons are hellish creatures encountered inside higher levels dungeons, protecting these locations against intruders. These creatures have the appearance of a hybrid between demon and lizard. The red eyes and the fire surrounding its paws are clearly its more eccentric characteristics.

According to its description in the Arena Player's Guide, the Fire Daemon is origined from the "netherworld," they travel to Mundus in conformation with their own interests, not having any mention about being summoned by wizards like other creatures.

The Fire Daemon is indeed one of the strongest creatures in The Elder Scrolls: Arena, together with Iron Golems, Medusas, Vampires and Liches. They have a high amount of Health, immunity to mundane weapons and can also deal devastating blows with their fireballs at long range, and with their fiery pickaxe at melee. The Arena Player's Guide also attributes high intelligence and a chaotic nature to the creature. Fire Daemons also have the ability to see invisible beings.

The Fire Daemon stands between Iron Golem and Medusa in terms of power. Their first apparition occurs in Crystal Tower, inside the Bestiary.

The Fire Daemon appears in the following locations: 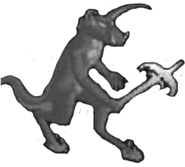 Fire Daemon as seen in the official game guide

Retrieved from "https://elderscrolls.fandom.com/wiki/Fire_Daemon?oldid=2980139"
*Disclosure: Some of the links above are affiliate links, meaning, at no additional cost to you, Fandom will earn a commission if you click through and make a purchase. Community content is available under CC-BY-SA unless otherwise noted.