Summons a fire storm that deals 100

For other uses, see Fire Storm.

Fire Storm is a Master-level Destruction spell that deals 100 base damage, hitting closer targets harder than those further away.

Fire Storm unleashes an explosion of flames centered at the caster's location, immediately dealing high fire damage to all surrounding creatures and characters within range. No damage is inflicted to the Dragonborn, unlike with the Blizzard spell. 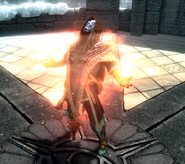