Have an image of this location?
Then please upload it!

For other uses, see Firemoth.

Firemoth is an island directly west of Seyda Neen with an old fort built on it, mainly populated by House Redoran. During the events of The Elder Scrolls Online: Morrowind, the island is invaded by slavers and the Vestige is tasked with reclaiming it and freeing the slaves.

Investigate Governor Omellian's involvement with the shipwreck by traveling to Fort Firemoth and defeating the slavers there. 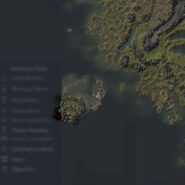 Composite map
Add a photo to this gallery

Retrieved from "https://elderscrolls.fandom.com/wiki/Firemoth_(Online)?oldid=3039796"
*Disclosure: Some of the links above are affiliate links, meaning, at no additional cost to you, Fandom will earn a commission if you click through and make a purchase. Community content is available under CC-BY-SA unless otherwise noted.