"When High Lord Torinaan came to this isle, our city sprang from his first step onto its rocky shores. Be welcome to First Hold, birthplace of the High Elves who carry our past..."
―Arena greeting when entering the city.[src]

Firsthold or First Hold is one of the eight major cities located in the province of the Summerset Isles, being the capital of the region of Auridon. As its name describes, Firsthold is the first settlement on the Summerset Isles and is perhaps the very first modern settlement on Tamriel, predating the cities of the human races and the beast races.

Firsthold is located on the northernmost point of Auridon, the second largest island of the Summerset Isles and the eastern bulwark of the province. Firsthold was founded by High Lord Torinaan, who originated from Aldmeris, the ancestral home of the Elves. Torinaan landed on the northern coast in modern-day Vafe and eventually created Firsthold, on the highest cliffs overlooking the Abecean Sea. The cliffs of Firsthold are large, and the hidden coves underneath Firsthold are vast, seemingly endless. Firsthold is a heavily secured city-state with nigh impenetrable walls and water canals built around the Diceto River, which eventually falls into the Rilis Basin. Firsthold has beautiful parks, and gorgeous gardens with a wide variety of flora ranging from Kanthleaf and trimmed hedges. Castle Firsthold is situated on the northern edge of Firsthold, separated by the Diceto River and large walls. The Great Orrery is a structure built by Vanus Galerion that looks into the cosmos and gives an interesting look of Tamriel. Because of how much of a thriving metropolis Firsthold represents, many settlements have inhabited the area including Greenwater Cove, West Guard, and North Beacon.

During the Merethic Era, the Aldmer of the distant land of Aldmeris had left their ancestral home for unknown and vague reasons. High Lord Torinaan was one of the first pioneers from the Elven homeland to venture into Tamriel and inhabit the continent. Aboard his ship, Torinaan landed on an alcove called the Nine-Prow Landing, located north of the ruins of Castle Rilis. From there, Torinaan named himself the first Kinlord of Auridon and made an oath, never to leave his new home and to protect it at all costs. After this, he established a Kinhouse which became the famous Firsthold Castle that still exists in the city-state to this day. His home was then invaded by the long forgotten denizens of Auridon. The Gheateus and Welwa had invaded his home, but his swift action defeated the monsters with the power of the stars and his Varla Stones. Torinaan and his people began a large exodus against the forest creatures of the Blessed Isles until they were smitten from the face of Nirn. After Torinaan's accomplishments on Auridon, many other Elves from Aldmeris began to migrate into the Summerset Isles and spread out into the rest of the Summerset Isles. They establishing more Kinhouses and Kinlords from as far as Sunhold to Lillandril.[3][4]

During the early years of the second era, Vanus Galerion was a student of the well-known Iachesis, a member of the Psijic Order of Artaeum. Galerion had a passion for the arcane arts and wanted to share his knowledge to the denizens of Tamriel, so he sought out a way to spread this knowledge, and he began his pursuit out of the city of Firsthold. His actions were met with great opposition by the public when they realized that he would give the world, the ability to use fire, lightning, and concoctions to manipulate being's body. Galerion was forced to meet with Iachesis and Rilis XII, the Kinlord of Firsthold to talk about the group he was created. What the Psijic Student said to the Kinlord and Master Psijic has tragically not been recorded but has been pondered by the modern scholars of the world. After that meeting, the Mages Guild was formed and was forced to have guards. Because earning loyalty doesn't just require money, Galerion created the Order of the Lamp, a knightly order operating throughout Tamriel like the County of Phrygias in the Iliac Bay. The Guild brought many people together as friends like Rilis towards Iachesis and Galerion of the Psijic. As time went on, the Mages Guild spread throughout all corners of Tamriel, teaching the people the ways of Magic from the rich, to the poor.[5][6]

The Queen and the Eagle; the Tale of Ayrenn[edit | edit source]

In 2E 563, Ayrenn of Alinor was to be named the next Queen of the Summerset Isles after her father, Hidellith. Her family gathered at the Crystal Tower to celebrate her enrollment into the Sapiarchs' Labyrinth where she would study there for about three-thousand five-hundred and fifty-five days, and then become the next leader. However, Ayrenn had disappeared and left the province to get a glimpse of the life outside of her domain. The Sapiarchs had noticed strange occurrences implying something important is bound to happen. One such event was that the Great Orrery of Firsthold had spun around backward and a young eaglet sat atop the statue of Topal the Pilot. Because of her disappearance, her younger brother, Prince Naemon was to inherit the throne in Ayrenn's absence and study at the Sapiarchs' Labyrinth. In her travels, Ayrenn drank with Mabjaarn Flame-Hair, the High Queen of Skyrim from Windhelm and stole the Indigo Scrolls from the city of Necrom. Years later, Ayrenn would assume the throne of Alinor and established the First Aldmeri Dominion.[7][8]

During the Alliance War in 2E 582, the city of Firsthold was ruled by High Kinlord Rilis XIII, who was the leader of the First Auridon Marines and was a staunch supporter of the First Aldmeri Dominion under Queen Ayrenn. At this time, a radical group known as the Veiled Heritance began to rise throughout Auridon in response to the formation of the Dominion. The Heritance committed terrorist attacks throughout Auridon and the Blue Divide ranging from burning the township of Silsailen and conspiring with the Ebonheart Pact. When High Kinlady Estre was exposed as the leader of the Veiled Heritance, she had begun the next stage of her plan and unleashed a Daedric army from the depths of the Deadlands, the Oblivion Plane of Mehrunes Dagon. Through her magic, she was able to take control of the city of Firsthold, operating out of the Castle. The Aldmeri Dominion had to step in and seize control over Firsthold, but the process was dwindling. With the help of the Vestige, the Dominion was able to withstand the Daedric Forces and reach the castle. Trying to contact Dagon, Estre chanted in the depths of the Deadlands while the attack was continuing. The Vestige entered deep into the Deadlands and encountered Estre in the center of the lava basin. In an epic battle, the two fought until Estre was ultimately defeated. Even though their leader perished, the Veiled Heritance continued to torment the Dominion, especially after the events in Grahtwood.[9][10]

During the Imperial Simulacrum from 3E 389 to 3E 399, Emperor Uriel Septim VII was imprisoned along with Talin Warhaft in the Deadlands by Jagar Tharn. Tharn planned for months to capture the throne, and he was able to achieve so in the span of ten years. Tharn had a powerful weapon called the Staff of Chaos, and he split it into nine pieces and scattered them across Tamriel, the staff was the only thing keeping Uriel Septim and Warhaft in Oblivion. A warrior escaped his clutches and traveled all corners of Tamriel to retrieve the missing pieces. The hero was known as the Eternal Champion, and he assembled the staff and defeated Jagar Tharn at the Imperial Palace. The Eternal Champion had at one point visited the city of Firsthold in their quest to recover the pieces. The city of Firsthold was under the rule of King Kalalian.[11]

During the Warp in the West in 3E 405, the city of Firsthold was under the leadership of Reman Karoodil, who had lost his son around this time. When news of this reached Wayrest, Lady Morgiah, the daughter of Queen Barenziah met with Mannimarco, the King of Worms to bring back his son from the dead, so that she can become the Queen of Firsthold. Later on in the year, Morgiah had married Reman Karoodil from the city of Firsthold, but this had brought about controversy throughout the two kingdoms of Wayrest and Firsthold. Many people would conspire against the holy matrimony to prevent foreign influence within Auridon and Firsthold. Lady Gialene of Skywatch had sought a way to expel the Black Queen from Firsthold and had planned to do so with the help of the Trebbite Monks, who have valued pure Altmeri bloodlines as their leaders.[12][13]

While King Karoodil was dealing with pirates off the coast of Calluis Lar, Gialene planned the Firsthold Revolt and had Friar Lylim orchestrate the attack in secret. The court of Firsthold gathered in the war room where Morgiah planned out the defense for Firsthold. Somehow, Morgiah knew Gialene was responsible and exclaimed that she would use Battlemages to attack the revolutionaries. Gialene had given the order to Lylim to use a reflection spell of Mysticism to counterattack the firebolts. However, upon breaching the Firsthold Gates, the opposition was met with the City Archers, who fired into the army, demolishing the group. Before King Karoodil returned, Morgiah executed Gialene's conspirators and exiled her back to Skywatch. Morgiah and Karoodil remained married and had two children, Goranthir and Rinnala. The two led Firsthold into the fourth era.[12][14] 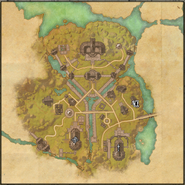 The former card art for the Summerset Orrery in Firsthold; the continents were later removed.
Add a photo to this gallery

Notice: The following are unlicensed references. They are not copyrighted by a ZeniMax Media company, but can still be considered part of The Elder Scrolls lore and are included for completeness.
Retrieved from "https://elderscrolls.fandom.com/wiki/Firsthold?oldid=3099291"
*Disclosure: Some of the links above are affiliate links, meaning, at no additional cost to you, Fandom will earn a commission if you click through and make a purchase. Community content is available under CC-BY-SA unless otherwise noted.