For other uses, see Five Claws.

The Five Claws Lodge is a tavern in Leyawiin, just to the northeast of the west gate. Witseidutsei is the cleanliness-obsessed proprietor of the lodge.

It is here the Hero finds three members of the Fighters Guild causing trouble; they are drunk and angry because they cannot find work.

Modryn Oreyn sends the Hero to Leyawiin to investigate what has happened to three other Guild members. Apparently, they have been drawing a lot of negative attention towards the Fighters Guild and causing trouble at the Five Claws Lodge. 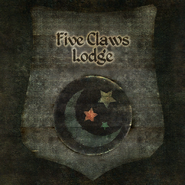 The Five Claws Lodge sign
Add a photo to this gallery

Retrieved from "https://elderscrolls.fandom.com/wiki/Five_Claws_Lodge?oldid=3065337"
*Disclosure: Some of the links above are affiliate links, meaning, at no additional cost to you, Fandom will earn a commission if you click through and make a purchase. Community content is available under CC-BY-SA unless otherwise noted.