For other uses, see Flame Atronach.

Flame Atronachs are Daedra that appear in The Elder Scrolls Online.

The flame atronach floats off the ground, wreathed in fire as it spins and twirls with ease. Comfortable both in melee and at range, the flame atronach can lob deadly balls of fire, and it radiates a continuous burning aura, making it quite dangerous at any distance. Unwary adventurers may also find themselves scorched by the Daedra's most impressive attack, a geyser of flames that erupts from the ground. The flame atronach can even be deadly once defeated, when it explodes in a last-ditch effort to destroy its attackers. 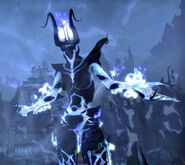 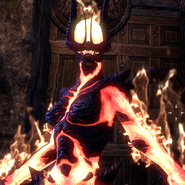 Retrieved from "https://elderscrolls.fandom.com/wiki/Flame_Atronach_(Online)?oldid=3123577"
*Disclosure: Some of the links above are affiliate links, meaning, at no additional cost to you, Fandom will earn a commission if you click through and make a purchase. Community content is available under CC-BY-SA unless otherwise noted.