For other uses, see Flame Atronach.

Flame Atronachs are a species of lesser Daedra that can be encountered as enemies, or summoned as allies. They are the weakest of the three Daedric atronachs, symbolizing fire.

Flame atronachs resemble female humanoids made entirely of fire, wearing loose pieces of black metal armor. They have three clawed fingers on each hand, and two toes on each foot. They wear a metal mask shaped like a woman's face, which features two long, swept-back horns that serve as their "ears."

When not attacking, flame atronachs levitate in place, occasionally spinning or doing flips. They make a faint whistling noise similar to breathing, along with the crackling of flames. They stare at friendly creatures that approach them before losing interest. When they move, they leave a short trail of fire on the ground behind them.

Flame atronachs, unlike other Daedra, rely heavily on magic attacks and keeping their distance in a fight. They get as far away as they can from a target, while still being in range, and hurl firebolts at it from a distance until either it or the target dies. As the target gets closer, they switch to casting flames and, at higher levels, cast flame cloak before running away to safety. If the target gets within melee range, they may slash or backhand the target with their arms, which deal both physical and fire damage.

Once a flame atronach dies, it explodes in the same way as a fireball blast, but stronger. This can deal fatal damage to any creature already substantially weakened from already fighting them.

Flame atronachs come in a few types, though visually identical, their stats differ. 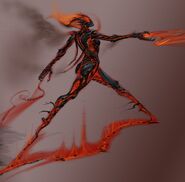