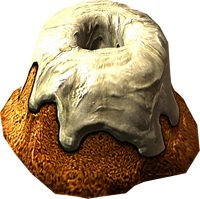 Food Merchants are merchants in The Elder Scrolls V: Skyrim. These merchants sell various foods, drinks, and occasionally some ingredients.

Many food merchants sell their goods from around 8am-8pm in merchant stalls or all day in taverns in major cities in Skyrim. These merchants usually only have 50–100

to buy items in return, and their businesses cannot be invested in.

In addition, hunters may occasionally be encountered while traveling Skyrim. These hunters will aggressively pursue any nearby animals, but will not attack unless provoked. The hunters are willing to sell some of their recent kills, but usually have only 10–15

to buy items in return.

Food merchants and vendors of Skyrim usually choose to sell only a certain type of food. Owners of market stands will usually have their goods displayed throughout their stall. Owners of taverns have various flavors of alcoholic beverages on tap, and sell a little bit of food. Their displayed goods can be stolen.

Owners of merchant stalls may mention that they or their family either go on occasional hunts or own a farm nearby which provides the food that they sell. Taverns usually buy their alcohol, either from local breweries, such as Honningbrew Meadery or Black-Briar Meadery, or from one of the neighboring provinces of Skyrim.

Retrieved from "https://elderscrolls.fandom.com/wiki/Food_Merchants_(Skyrim)?oldid=2978537"
*Disclosure: Some of the links above are affiliate links, meaning, at no additional cost to you, Fandom will earn a commission if you click through and make a purchase. Community content is available under CC-BY-SA unless otherwise noted.