Strange gauntlet in the Midden

"Years back, I had to ferret away some booty nearby. We'd sunk an Imperial Galleon off the coast. Good plunder, but we needed to travel light. We stashed what we couldn't carry, and I hid it with a trick I know."
―Velehk Sain[src]

Forgotten Names is an unmarked quest available in The Elder Scrolls V: Skyrim in which the Dragonborn must discover the purpose of a mysterious Daedric Gauntlet located underneath the College of Winterhold in The Midden.

Below the College of Winterhold, in the Midden Dark, lies a Daedric Relic. In the center of a room upon a pillar stands a gauntlet with the Daedric letter "Oht" glowing in the palm. On a table nearby, the Dragonborn will find the Midden Incident Report, which details the fate of the deceased students surrounding the Relic, and the Investigator's Key. According to the report, the Relic was unable to be moved, so the author instead pried off the four rings found left behind on the Gauntlet. The rings were then stored in The Arcanaeum, in the Master Investigators Box. The box may be opened with the Investigator's Key, or picking the Master-level lock. Note that opening the box to take the rings is counted as stealing, so one needs to avoid Urag gro-Shub's detection and attempts to stop you from taking the rings. Instead, one can wait after Urag retires to his room at night; alternatively Urag will not be present in the room immediately after completing "The Eye of Magnus."

The names and order of the rings are as follows:

Upon placing all of the rings on the Relic, Velehk Sain is summoned from the gauntlet and speaks to the Dragonborn:

We're beneath Winterhold College. The Midden. "Ah, I was beginning to think the day would never come. So you broke the binding spell, did you? Matter little. Their souls are trapped in Oblivion all the same, and here I stay."

You're going back where you belong, dremora. "Where I belong is back aboard my ship, on the Abecean. You've no hope of defeating me, pup. Don't bother. Why not broker a bargain, instead?"

Not a chance. "Have it your way meat."

I'm listening. "Those kids are dead anyway. Killing me won't bring them back. I, on the other hand, have done quite a bit with my time on Mundus. Release me, and I'll share a bit of my wealth with you."

What wealth is this? "Years back, I had to ferret away some booty nearby. We'd sunk an Imperial Galleon off the coast. Good plunder, but we needed to travel light. We stashed what we couldn't carry, and I hid it with a trick I know. I can point you in the right direction, and we'll each go our separate ways."

How could I even release you? "Names have power, lad. (If the Dragonborn is female: lass.) You should know by now. Just say "Velehk Sain, I release you.", and "Poof!", I'm on my way."

Vehlek Sain, I release you. "There's a smart lad. (If the Dragonborn is female: lass.) Check the map. The loot's hidden there. It'll show itself when you get near."

Vehlek Sain, I banish you to Oblivion! "Clever try, scab, but it won't be that easy!"

Note:Attempting to banish Vehlek Sain or refusing his offer will start combat and the Dragonborn will be forced to slay him.

He informs that the Gauntlet was part of a binding spell that held him in Mundus, and, despite his admitting to having killed the students, tries persuasion to free him in exchange for wealth. This wealth is the result of excess booty which came from a captured and looted Imperial galleon that he was unable to carry. To stash the treasure, he hid his cache both geographically and magically.

To release him, the Dragonborn must say "Velehk Sain I release you." He will laugh, give his thanks, and portal away. A treasure map will then appear in the inventory, which leads to a chest at the base of a Shrine of Talos west of the College of Winterhold. The chest will appear as if by portal when the Dragonborn gets near the spot depicted in the map. See the treasure page for details.

Alternatively, the Dragonborn may attempt to get rid of him by saying "Velehk Sain I banish you to Oblivion." This will fail, and Velehk Sain will then attack. If he is defeated, his body will only hold two scimitars, Hammerfell garb, Redguard boots, and a Daedra heart.

It should be noted that the Conjuration spells Banish Daedra and Expel Daedra do affect Velehk Sain, but by draining his health until he dies rather than sending him back to Oblivion. 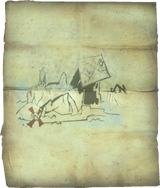 The Report and the Key on the table