Heart of thorn... bones of the wild... in life, Forsworn... rise from death, Blood of our Blood.

There are two distinct types of Forsworn Briarhearts: magic casters, and melee fighters. The attack methods used by Briarhearts are one-handed weapons and destruction magic, usually fire or frost based, but sometimes shock. The melee using Briarhearts can be found dual-wielding Forsworn axes or swords, and are usually leveled with the Dragonborn. They are also rather quick, and can make short work of their enemies when at close range.

The magic-casting Briarhearts will often begin the battle by activating a cloak spell and conjuring an atronach. They can cast Ice Storm, Icy Spear, Frost Cloak, and Conjure Frost Atronach or Fireball, Incinerate, Lightning Bolt, Sparks, Flame Cloak, and Conjure Flame Atronach, depending on the preferred element of the Briarheart. These enemies can be very difficult to face at longer ranges, and they also run backwards if chased, making them harder to hit with melee weapons.

The partially-exposed Briar Heart can also be targeted with a bow if the Dragonborn is skilled enough. Striking the heart will deal more damage than usual and is easier to score a critical hit on it, though not significant. 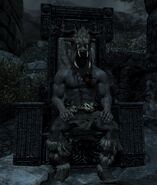