Epic
Pilfer: Draw a random item from your deck with cost equal to Forsworn Looter's power.

For other uses, see Forsworn Looter.

Forsworn Looter is a creature card in The Elder Scrolls: Legends that is a part of the Heroes of Skyrim expansion.

Forsworn Looter can be purchased for 400 soul gems.

Forsworn Looter should be given damage boosts from items to get a greater effect from its power. The more damage it does, the stronger cards the player will draw. Do not go over the magicka cost of the highest creature in the deck or the player will gain no benefit from Forsworn Looter's power. 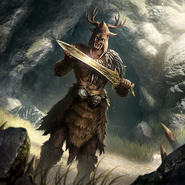 Retrieved from "https://elderscrolls.fandom.com/wiki/Forsworn_Looter_(Legends)?oldid=3004979"
*Disclosure: Some of the links above are affiliate links, meaning, at no additional cost to you, Fandom will earn a commission if you click through and make a purchase. Community content is available under CC-BY-SA unless otherwise noted.