Fort Blueblood is a fort located in Blackwood. It is inhabited by marauders.

The inside layout is that of a typical fort, with corridors and larger rooms where the marauders spawn. At the end in the second level is a room with coffins where the Hero will find what they are looking for in the quest "Leyawiin Recommendation." There are two leveled monsters guarding them, though.

There are a few tiger lillies and green stain cups around the site. There are also some pitcher plants in the area, but they are impossible to harvest. It is possible that dragons used to be sighted near the location as Dagail's description of the fort included, "Where dragons flew high.," though it could be a reference to it being a former Imperial fortress, as the Imperial symbol is a dragon.

Hundreds of years before, when the fort was still active, Dagail's father, Manduin, fought and died in the fortress for the Imperial Legion.

Other angle of the fort 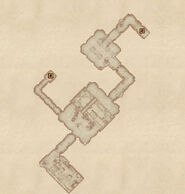 Fort Blueblood Halls
Add a photo to this gallery

Retrieved from "https://elderscrolls.fandom.com/wiki/Fort_Blueblood?oldid=2927028"
*Disclosure: Some of the links above are affiliate links, meaning, at no additional cost to you, Fandom will earn a commission if you click through and make a purchase. Community content is available under CC-BY-SA unless otherwise noted.