Caught in the Hunt

Fort Grief is a fort located on an island in the Niben Bay in southern Cyrodiil. It serves as a human hunting ground for Kurdan gro-Dragol and plays a large role in the quest "Caught in the Hunt." There is a lever at the entrance of the fort; activate it to open the caged doors.

In Bravil, the Hero will hear that Aleron Loche is having problems. The rumors point to Aleron's wife, Ursanne. Go speak with her at Aleron Loche's House or at the local Chapel of Mara. 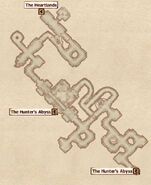 The Hunter's Run
Add a photo to this gallery

Retrieved from "https://elderscrolls.fandom.com/wiki/Fort_Grief?oldid=2927044"
Community content is available under CC-BY-SA unless otherwise noted.