An Affront to Mara
Prisoners of the Sphinx

For other uses, see Fort Sphinxmoth.

"Built by the Second Empire to house a garrison of Border Scouts, Sphinxmoth was placed between feuding tribes of Bosmer and Khajiiti in an attempt to stop their cross-border raiding. When the Empire fell, the fort's garrison was replaced by the very raiders it was built to control."
―Fort Sphinxmoth Loading Screen[src]

Fort Sphinxmoth is a location that appears in The Elder Scrolls Online. 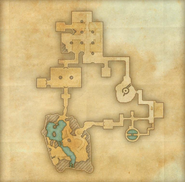 Retrieved from "https://elderscrolls.fandom.com/wiki/Fort_Sphinxmoth_(Online)?oldid=2899527"
Community content is available under CC-BY-SA unless otherwise noted.