When the Vow Breaks

For other uses, see Fort Strand.

Fort Strand is a fort located just east of Anvil. It is inhabited by Marauders and their leader, Bjalfi the Contemptible, who holds Rockshatter. Outside are a few bandits waiting when one arrives.

This two-level ruin is both a fort ruin and a cave. Corridors have been dug out so one can reach a room deep down, with planks to walk over from side to side before coming to the end, where there are two chests, but there isn't much to loot here. At the other end of this level is a room with a waiting Marauder and a cave dug out with a chest.

From this end when going into the next level there are a few traps. Falling objects when walking on pressure plates and a bridge falling apart when walking across. One can jump to the other side or just fall down to the room under. At the end of the second level one will find Bjalfi and his dog. There is a chest with a very hard lock in the same room but it contains very little to loot. All bandits are wearing leveled armor and weapons.

Maeva's once-good but now no-good husband Bjalfi has run off to be a bandit and taken Rockshatter; she would like it back. She asks the Hero for help. 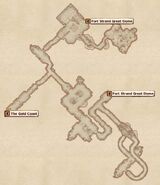 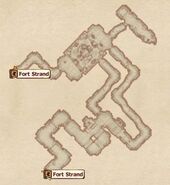 Fort Strand Great Dome
Add a photo to this gallery

Retrieved from "https://elderscrolls.fandom.com/wiki/Fort_Strand_(Oblivion)?oldid=2963566"
*Disclosure: Some of the links above are affiliate links, meaning, at no additional cost to you, Fandom will earn a commission if you click through and make a purchase. Community content is available under CC-BY-SA unless otherwise noted.