The Bloodworm Helm
Seeking Your Roots

Fort Teleman is a fort located some ways east of Arpenia and south of Shattered Scales Cave on the southern tip of the Panther River.

Alchemical plants are located close to the ruins and include Clouded Funnel Caps fungi, Green Stain Cup fungi, Somnalius flowers, and a large number of Stinkhorn plants. There are six rare Pitcher Plants scattered throughout the area outside the fort. There are two Nirnroots close by as well.

To the west is a small, unmarked lake that has some green stain cups, a few clouded funnel caps, three more Nirnroots, and six more difficult-to-harvest Pitcher Plants.

There is a staircase that does not lead into the Fort. At the top, there is a chest with gold. Also, on the floor, there is an Amulet of Luck.

The layout is typical for a fort, but there are also altars and banners added by the necromancers. The second level is more like a cave and in the last room one can find Irlav. There are a few chests with minor loot scattered around.

Hannibal Traven says that two of the high-ranking members of the Council have left, taking two powerful artifacts with them. He is afraid that Mannimarco will find the mages, kill them, and take the artifacts, thereby gaining more power.

He wants the artifacts safely recovered and brought back to the Arcane University. Irlav Jarol took the Bloodworm Helm to Fort Teleman.

Sinderion is looking for a rare root known as Nirnroot. Bring him 10 Nirnroots and he'll make you a potion called the Elixir of Exploration, which is very useful for exploring dungeons. 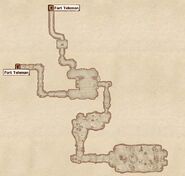 Retrieved from "https://elderscrolls.fandom.com/wiki/Fort_Teleman?oldid=2953759"
*Disclosure: Some of the links above are affiliate links, meaning, at no additional cost to you, Fandom will earn a commission if you click through and make a purchase. Community content is available under CC-BY-SA unless otherwise noted.