The Fortress of Ice is a ruined stronghold located deep within the snowy fields of Winterhold. It was once the personal fortress of Shalidor, the Arch-Mage of the College of Winterhold and the Patron of the Mages Guild.

The exact location of the Fortress of Ice is currently unknown, having been completely ruined by the Fourth Era. It is located southwest of Winterhold, somewhere around the ruins of Saarthal and Alftand. The nearest settlements to the Fortress of Ice are the townships of Helarchen Creek and the city of Winterhold, with the ruins being not far from the road in between Winterhold and Dawnstar. These ruins are inhabited by the rabid Ice Wolves of the north and the dangerous Ice Golems, creatures that are made of pure magicka, not like the Atronachs of Oblivion. The ruins have been sought out by the Mages Guild of Winterhold.

During the Imperial Simulacrum from 3E 389 to 3E 399, Emperor Uriel Septim VII was imprisoned along with Talin Warhaft in the Deadlands by Jagar Tharn. Tharn planned for months to capture the throne, and he was able to achieve so in the span of ten years. Tharn had a powerful weapon called the Staff of Chaos, and he split it into nine pieces and scattered them across Tamriel, the staff was the only thing keeping Uriel Septim and Warhaft in Oblivion. A warrior escaped his clutches and traveled all corners of Tamriel to retrieve the missing pieces. The hero was known as the Eternal Champion, and he assembled the staff and defeated Jagar Tharn at the Imperial Palace. The Eternal Champion had at one point visited the ruins of the Fortress of Ice in their quest to recover the pieces.[1]

After retrieving the first piece of the Staff from Fang Lair in Hammerfell, the Eternal Champion was sent to the city of Winterhold after hearing rumors from the locals and being told through dreams by Ria Silmane. Thelen Kaarn, a mage of the Winterhold Mages Guild, knew where the next piece was located in Skyrim, but would only tell the Champion if they retrieved an ancient tablet from the Fortress of Ice. The Champion would then travel to the ruins and obtain the tablet from the monsters of the ruined fort. Kaarn would then point the way to the Labyrinthian, a vast ruin located near the city of Snowhawk.[2]

Fortress of Ice Map in Skyrim.

The First Level of the Fortress. 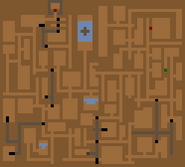 The Second Level of the Fortress.

The entrance hall to the fortress.

The second floor entrance hallway.
Add a photo to this gallery

Start a Discussion Discussions about Fortress of Ice

See more discussions >
Retrieved from "https://elderscrolls.fandom.com/wiki/Fortress_of_Ice?oldid=3077080"
*Disclosure: Some of the links above are affiliate links, meaning, at no additional cost to you, Fandom will earn a commission if you click through and make a purchase. Community content is available under CC-BY-SA unless otherwise noted.