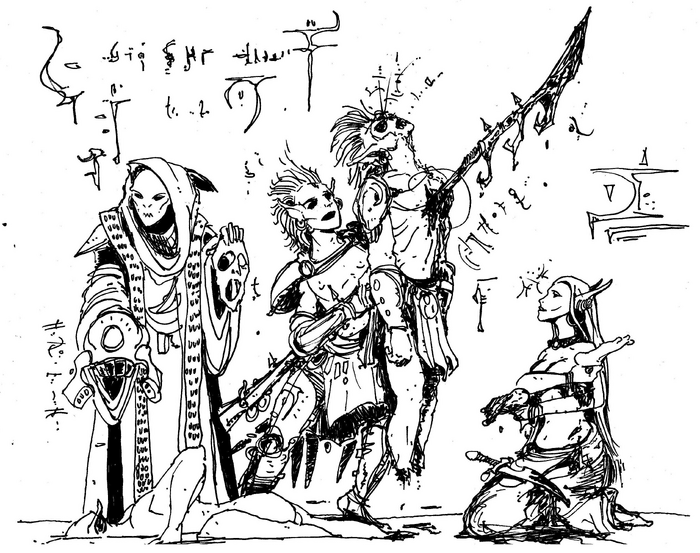 "But the Tribunal had become as greedy as Kagrenac upon hearing of the power of the Heart and they coveted it. They made ritual as if to summon Azura as Nerevar wanted but Almalexia used poisoned candles and Sotha Sil used poisoned robes and Vivec used poisoned invocations. Nerevar was murdered."
―Michael Kirkbride[UL 1]

Posted by Michael Kirkbride for Morrowind's 10th anniversary on May 1st, 2012. Originally commissioned by Flanigus.[UL 2]

Foul Murder is a drawing by Michael Kirkbride. It depicts the supposed death of Hortator Indoril Nerevar at the hands of the Tribunal. Sotha Sil is on the far left, holding Nerevar's severed face. Vivec is second from the left, stabbing his spear through Nerevar's heart. Nerevar's corpse is second from the right, held up by Vivec's spear. Almalexia is kneeling down on the far right, holding Nerevar's ankles and feet, and with a sword in her lap. Voryn Dagoth is at the bottom, forced into the dirt by the mass-altering abilities of Kagrenac's Tools.[UL 3]

Notice: The following are unlicensed references. They are not copyrighted by a ZeniMax Media company, but can still be considered part of The Elder Scrolls lore and are included for completeness.
*Disclosure: Some of the links above are affiliate links, meaning, at no additional cost to you, Fandom will earn a commission if you click through and make a purchase. Community content is available under CC-BY-SA unless otherwise noted.