For the character in Online, see Frandar Hunding (Online).

Frandar do Hunding Hel Ansei No Shira, commonly known as Frandar Hunding, was a Redguard hero. He was born in 1E 720, in the region of High Desert, on the continent of Yokuda. He grew up in a period of constant turmoil,[1] the civil war in Yokuda, and led his people from the annihilation they faced to their new home in Hammerfell. He is also famous as being the father of his son, Divad.[2]

Frandar belonged to the Sword-Singers. This faction, initially loyal to the Yokudan Empire, originally came from the high-class members of society. They devised training called "The Hall of the Virtues of War." Frandar was a master Ansei (the most skillful of the Sword-Singers) at the height of the turmoil of Torn's death. Many Ansei had hung up their swords and became master artisans instead. Some, however, like Hunding, sought true enlightenment through the dark times.[1]

In 1E 734, Hunding's father died in one of the many uprisings in revolt of the death of Randic Torn, leaving him to look after his four brothers and mother, which he did through his knowledge of the sword. He was in great demand as a guardian and escort, but his reputation preceded him, and multitudes awaited to face him in battle, as they would gain instant fame through defeating him.[1]

By 1E 750, Frandar has fought and won more than ninety duels. Nearly invincible with the sword, he gained such prestige and mastery that he eventually stopped needing to use real swords. He created, and began to use, the Shehai, or "Way of the Spirit Sword." He started using this around his ninetieth duel. During this duel, he had fought the evil Lord Janic and his seven Liches in the process.[1]

The Shehai is a magical mastery whereby the image of a sword is formed from pure thought. All sword singers eventually learn this "through the intense training and devotion to the gods of war and the way of the sword." The Shehai is able to concentrate and create the sword, and it takes shape in his hand, usually as a "pale thing of light, misty and insubstantial, a thing of beauty perhaps, but no weapon." Those Ansei of the highest level, and those of sensitivity and talent in magic, can in times of great stress, form a Spirit Sword. The Shehai, which is far more than mere light and air, but rather, an unstoppable weapon of great might, and a weapon which "can never be taken from the owner without also taking his mind."[1] This, then, is what Frandar was able to use.

After he was satisfied that he was, indeed, invincible, Frandar turned his thoughts towards the philosophy of the "Way of the Spirit Sword." He wrote his learning down in the Book of Circles whilst living as a hermit in a mountains of high desert in 1E 780 In that year, after having enlisted in, and fought, many battles of the empire (and winning all of them)—had thought himself ready for death, and retired to the cave in order to write his strategy and mystical visions to share with the other Sword-Singers.[1] After completion of this scroll, the Singers,[1][2] one of them his own son, Divad[2] sought him out, as they urgently needed his help.

Army of the Circle[edit | edit source]

Torn's Sword-Hunt had separated the Singers from the common people, and the rise of the "Last Emperor of Yokuda" created strife in the desert empire. The Emperor Hira, and his consort, Elisa's effort to take control of the empire, and put a stop to the insurrection, was to destroy the Sword Singers. He vowed that he would "search out every Singer" with his Brigand army, which was composed of Orcs and castoffs of the wars of the Empire, and to "scourge them from the face of the planet."[1]

The Sword-Singers, being peoples from the desert, were not particularly numerous, as the harsh landscape kept births few, however "growing up in the unforgiving wastes eliminated all but those of iron spirit and will." Thus the final strife which became known as the "War of the Singers," and these people were unprepared and unready to join together their individually great skills into an army that could defend their homes and lives.[1]

Due to his legend of being invincible on the battlefield, he was sought out, and without a choice in the matter, he was given command of the Singers. It is lucky for them that he had time to write down his years of accumulated wisdom, strategy, and ways of the Shehai, because his people fled to Mount Hattu, the "Father of the Mountains." He was able to form the remnants of the Singers into the Army of the Circle, named after his book, and the people learnt Hunding's Way, of his strategy and visions, as written in his Book of Circles, and his vision for a master stroke of victory, for the War of the Singers.[1]

War of the Singers[edit | edit source]

Frandar then formulated a plan, to be fought in a total of seven battles, to lead the Armies of Hira further and further into the wilderness, to the foot of Mount Hattu, where the final battle was to be fought. This plan he called the "Hammer and the Anvil." With each battle, the Army of the Circle, the untrained, undisciplined group of warriors that was his people, would learn more about his strategies and tactics, and grow stronger in the use of the Shehai, and be ready to defeat Hira's forces by the seventh battle. The battles progressed, and neither side was able to claim victory or defeat, but only able to slow down the progress of Hira's forces, with his large force advancing on the smaller army of Hunding. Though outnumbered thirty to one, his forces never faltered, and continued with his plan, and when his army maneuvered to the base of Hattu Mountain, the "Hammer" blow was delivered. The battle began, and many singers died, but Frandar Hunding knew, that, although few of his army would survive the battle (due to impossible differences in numbers), if successful, Hira and his army would not survive.[1]

Aftermath of the Battle[edit | edit source]

In the aftermath of the battle, fewer than twenty thousand Singers survived, but there was no army left to pillage and murder. Hunding rallied the Ra Gada to exterminate the goblins, but was killed in battle by the 8-foot confirmation needed abominations of the Flint-Tooth Tribe. Following his father's death, Divad, rose to command the Ra Gada.[3] There were more than 300,000 dead that day on the battlefield. Of the survivors, they were no longer an organized band of bandits.[1]

The Singers, though, mourned their losses and followed Hunding to the great port city of Arch, in the province of Seawind, where he had a flotilla of ships waiting. Knowing that they could no longer live in the desert empire, they left their homeland in search of a new one. The acts of Hunding, the Singers of Shehai, the Book of Circles and much more was unappreciated by the people, and thus they left their homeland. From there, the people left their homeland, of Yokuda, vowing to learn new ways as they travelled across the ocean. The vowed to adopt a new name, but to still honour the past. In honour of their final battle on Yokuda, they named the new land Hammerfell, and they adopted the name Redguards, as the Yokudans saw them as blood-red peoples, and they had guarded them from the evils of Hira. In honour of Hunding, the great "Warrior-Prince," each household in Hammerfell reportedly has a place by the hearth with an alcove big enough to hold the scroll known as the Book of Circles.[1]

There is no understating his legacy in Tamriel. Without him, the Sword Singers would never have defeated the Armies of Hira, and would never have left their homeland of Yokuda, as they would all have perished. They would never have arrived in Hammerfell, and thus the many accomplishments on Tamriel that have been achieved by the Redguards, and any involvement in any event or battle, would not have occurred.

He also passed down a wealth of knowledge about swords and sword-fighting. As quoted by Lady Benoch, in Words and Philosophy:

""Frandar Hunding," she says. "Lists thirty-eight grips, seven hundred and fifty offensive and eighteen hundred defensive positions, and nearly nine thousand moves essential to sword mastery. The average hack-and-slasher knows one grip, which he uses primarily to keep from dropping his blade. He knows one offensive position, facing his target, and one defensive position, fleeing. Of the multitudinous rhythms and inflections of combat, he knows less than one."[4]

On Stros M'kai, a city named Port Hunding was settled, the Statue of Hunding Bay was erected and Hunding Bay were all named after him.

Frandar's Son, Divad (also known as "Divad the Singer"), was born in 1E 760. Like his father he also learnt at the The Hall of the Virtues of War. He is believed to have secretly studied the Shehai Shen She Ru—the Way of the Spirit Sword, or simply the Shehai). The Emperor Hira attempted to assassinate him but was unsuccessful, and, the Sword Singers, under siege from this Emperor, beseeched Divad's father, Frandar Hunding, for help, climbing his Mount Hattu retreat. Initially, Frandar refused, but, eventually, relented, and devised the strategy known as the Hammer and the Anvil. Frandar has by this stage completed his magnum opus, the Book of Circles which then became compulsory reading for the Redguard peoples. Divad supposedly became increasingly famous, however, what he did to increase his stature over that of his father is not known.[2] 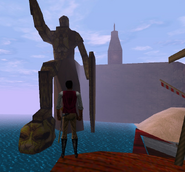 A Statue of Frandar Hunding on Stros M'Kai.
Add a photo to this gallery

Retrieved from "https://elderscrolls.fandom.com/wiki/Frandar_Hunding?oldid=3076557"
*Disclosure: Some of the links above are affiliate links, meaning, at no additional cost to you, Fandom will earn a commission if you click through and make a purchase. Community content is available under CC-BY-SA unless otherwise noted.