10 points frost damage to health and stamina per second

Frost Atronachs are large, hulking Daedra. They are found as both wild and summoned creatures. They are both companions and enemies, and are the only Atronachs that use melee attacks exclusively. Like all other Atronachs, their bodies are composed of their respective element, and the Frost Atronach is no exception, as its body is made of solid ice.

Frost Atronachs use their bulky forms to deal out physical damage, and never cast spells. Frost Atronachs are also completely immune to frost damage, but are 50% weaker to fire damage. Hitting them with a frost spell still counts as an attack though, and this will eventually turn them hostile.

The Frost Atronach has four melee attacks. One consists of a jabbing attack that the atronach does with its right pointy arm and two clubbing attacks that it does with its left club arm, which consists of brutal uppercuts and swipes with the forearm. The stab has longer range but the club deals more damage. The last attack is performed with its club arm, where it brings it up and smashes its "fist" into the ground for a damaging, area-of-effect staggering attack.

If one is very close to a hostile Frost Atronach, one's health and stamina will rapidly decrease as the icy touch of the atronach's body gives off a permanent frost cloak. This only applies to people and creatures the atronach (or its summoner, if applicable) is hostile to.

Frost Atronachs are highly vulnerable against long-ranged attacks, including archers, mages and dragons, making them best suited to short distance fights, such as those in dungeons and other tight areas.

The only three places to find Frost Atronachs are: The Chill (three), one can be in the summoning chamber of Cragwallow Slope if a high enough level, and three can appear in The Caller's chamber in Fellglow Keep during the College of Winterhold's questline. Otherwise, Conjurers, Thalmor Wizards and Draugr Scourge mages have the ability to summon the atronachs.

Frost Atronachs come in a few types, though visually identical, their stats differ.

A conjured Frost Atronach at the College of Winterhold 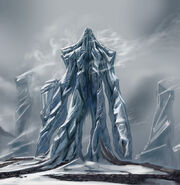 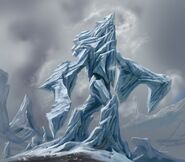 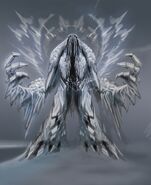