For other uses, see Fungi.

Skyrim is home to many different species of mushrooms and fungi, all having unique properties. They can be found abundantly throughout the many cave systems and underground locations of Skyrim. Some species prefer growing on decaying wood or dying tree roots above ground. They are excellent alchemy ingredients used for the creation of potions and are generally easy to find.

In Hearthfire, harvested fungi from Skyrim proper can be planted in gardens and greenhouses at homesteads.

The following have been discovered across the holds of Skyrim:

** Older references on Mundus did not consider lichens fungi.

Found directly south of Knifepoint Ridge, there is a small cluster of white caps and rocks that create a perfect circle, known as a fairy ring. A copy of Father of the Niben and a leveled staff lie in the center of this formation.

There is another fairy ring, wider but less dense, consisting of many different species of fungi. It is in the woods northeast of Bilegulch Mine or south-west of Fort Sungard. It might be hard to find, but a Dragon Burial Mound is nearby. The easiest way to get there is to go to Fort Sungard and jump off the southern wall (quite a high jump). Next, cross the paved road and head uphill towards the Bilegulch Mine. After few steps there will be a dragon burial mound to the left, the fairy ring is a few steps further.

In Dragonborn, there is a group of giant mushrooms named Tel Mithryn, built and cultivated by Telvanni Wizard Neloth in the southeast of Solstheim. These mushrooms are called Telvanni Towers and also appeared in Morrowind. They contain the living and work spaces for Telvanni wizards and their servants. 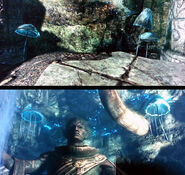 Blackreach Fungi
Add a photo to this gallery
Retrieved from "https://elderscrolls.fandom.com/wiki/Fungi_(Skyrim)?oldid=2970029"
Community content is available under CC-BY-SA unless otherwise noted.