Legendary
Summon: Choose a creature or item in your hand. Shuffle three copies of it with +3/+3 into your deck.

Galyn the Shelterer is a creature card in The Elder Scrolls: Legends added with the Return to Clockwork City expansion.

Galyn the Shelterer is best used in control decks that look to stall the game. His summon ability can be used to shuffle copies of a card that may be required later, whether it be for gaining life, drawing more cards, or buffing an item with Breakthrough. 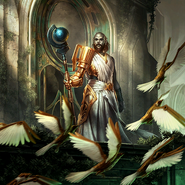 Retrieved from "https://elderscrolls.fandom.com/wiki/Galyn_the_Shelterer?oldid=3005163"
*Disclosure: Some of the links above are affiliate links, meaning, at no additional cost to you, Fandom will earn a commission if you click through and make a purchase. Community content is available under CC-BY-SA unless otherwise noted.