Gamblers are not very hard to kill, as they do not wear armor. They become hostile on sight, and are accompanied by the higher-level Cragslane Barkeep. They may wield any number of iron and steel weapons, including war axes, maces, and swords. The boss in his study to the left, Butcher, will not notice the Dragonborn fighting the gamblers or the barkeep unless his study is entered beforehand.

I Done Got Thaned![edit | edit source]

The Dragonborn must kill everyone in the cavern to become Thane of the Rift, because they give skooma and moon sugar to Sarthis Idren and Orini Dral in the Riften Warehouse to sell to citizens, and must be eliminated to prevent Wujeeta and other citizens of the Rift from taking skooma. 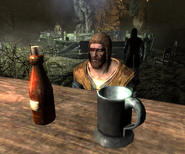 Gamblers
Add a photo to this gallery

Retrieved from "https://elderscrolls.fandom.com/wiki/Gambler?oldid=3030670"
*Disclosure: Some of the links above are affiliate links, meaning, at no additional cost to you, Fandom will earn a commission if you click through and make a purchase. Community content is available under CC-BY-SA unless otherwise noted.