For other uses, see Gaston.

Gaston Bellefort was the Breton author of a The Night Mother's Truth. His skeletal corpse can be found at the Dark Brotherhood Sanctuary in the nest of the domesticated Frostbite Spider named Lis.

A note on the skeleton, presumably written by Gaston, explains that he had been spying on the Dark Brotherhood, coming to and from the sanctuary, and had at one point attempted to enter it himself. It is implied that his infiltration failed and he was fed to Lis. 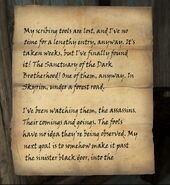 The first page of Bellefort's note. 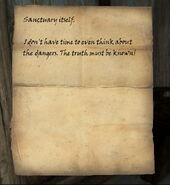 The second page of Bellefort's note.
Add a photo to this gallery

Retrieved from "https://elderscrolls.fandom.com/wiki/Gaston_Bellefort?oldid=2996406"
*Disclosure: Some of the links above are affiliate links, meaning, at no additional cost to you, Fandom will earn a commission if you click through and make a purchase. Community content is available under CC-BY-SA unless otherwise noted.