Through the Fringe of Madness
Rebuilding the Gatekeeper

For other uses, see Gates of Madness.

The Gates of Madness serve as a barrier between the Shivering Isles and The Fringe. Those wishing to pass must find a way to kill the Gatekeeper and retrieve the keys inside its body.

There are two gates in which to get into the Shivering Isles. The south gate opens on the side of Dementia using the Key to Dementia and the north gate requires the Key to Mania to allow access to Mania.

Through the Fringe of Madness[edit | edit source]

After entering the Shivering Isles the Hero must first pass through the Gates of Madness in order to find the lord of this Realm.

The Hero fought off an attempted invasion of The Fringe by the Forces of Order. Sheogorath wanted to reinforce his defenses, so he sends them to Relmyna Verenim to build a new Gatekeeper. 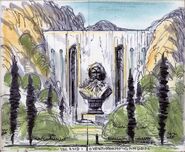 Jayred Ice-Veins infront of the corpse of the Gatekeeper.
Add a photo to this gallery

Retrieved from "https://elderscrolls.fandom.com/wiki/Gates_of_Madness_(Shivering_Isles)?oldid=2835304"
*Disclosure: Some of the links above are affiliate links, meaning, at no additional cost to you, Fandom will earn a commission if you click through and make a purchase. Community content is available under CC-BY-SA unless otherwise noted.