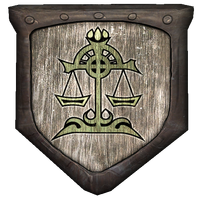 "Don't think you can barter with me like I'm one of those damned shopkeepers."
―Hold Guard[src]

General Goods Merchants can be found in almost every city in Skyrim. These merchants buy and sell most items. This includes:

The following is a list of all general goods merchants:

† Fences' gold depends on the progress of the city influence quests for the Thieves Guild. All fences will have total of 4000

available once all city influence quests are completed.

*Disclosure: Some of the links above are affiliate links, meaning, at no additional cost to you, Fandom will earn a commission if you click through and make a purchase. Community content is available under CC-BY-SA unless otherwise noted.
Advertisement