"Battles are won by trained and disciplined men. Wars are won by talented and exceptional individuals."
―General Tullius[src]


General Tullius is an Imperial general of the Imperial Legion. As of 4E 201, Tullius has been assigned as the military governor to Skyrim.[1]

General Tullius was born in Cyrodiil, where he eventually became a talented General in regards to putting down unrest.[1]

In 4E 201, after what the Empire considered the murder of High King Torygg by Ulfric Stormcloak, General Tullius was sent to Skyrim[2] by Emperor Titus Mede II.[1] Ulfric was leading a Civil War against the Empire, and the Legion was, originally, unsuccessful in beating his Stormcloaks. When Tullius got sent to Skyrim, the Empire became more successful in their campaign.[2] Tullius, being experienced in putting down unrest, started turning things around for the Empire.[2] He personally captured Ulfric Stormcloak and his top lieutenants at Darkwater Crossing, and was trying to have them executed at Helgen, until Alduin appeared and Ulfric, alongside his men, escaped in the chaos.[3] Still, under his command, the Legionnaires, largely consisting of a locally recruited militia Legion of scouts and skirmishers,[4][5][6] started massacring the Stormcloaks,[7] and slowly pushing them back.[1] Tullius had troops stationed in the Pale, which he was trying to use in attempts to conquer Dawnstar,[8][1] he was also attempting to conquer Winterhold from the Stormcloaks, as its proximity to Windhelm would force Ulfric to keep forces stationed at home.[1] Tullius also pocketed men in the Rift,[8] who took out the Stormcloak soldiers at Shor's Watchtower.[9] These troops were stationed here to secure the rear guard of the Legion in the event of a siege of Windhelm.[1] Tullius also ordered Margret, an Imperial spy in the Reach, to find and obtain the deed to Cidhna Mine, a silver mine serving as the jail of Markarth, which belonged to the Stormcloak-loyal Silver-Bloods.[10] Thonar Silver-Blood, the head of the family, found out that Margret was a spy, and tried to have her get assassinated by Weylin, a member of the Forsworn.[11]

Despite his successes, Tullius also had some obstacles. Tullius' requests for reinforcements were refused by the Emperor, as he could not risk weakening Cyrodiil's defenses on the border with the Third Aldmeri Dominion.[1] Nordic culture also often worked against Tullius, as he knew little of the Nordic ways.[1] Where Tullius had learned that the High King was chosen through the Moot, the Jagged Crown was sought by Ulfric, as it would potentially rally people behind him, and legitimize his claim,[12] since the Crown was used to determine the High King before the Moot was formed.[7] Tullius also requested Balgruuf the Greater, the Jarl of Whiterun, to garrison Imperial forces in his city.[12][13] However, the Jarl did not accept Tullius' requests, instead preferring to remain neutral.[13] When the Legion became aware of Ulfric's plans to march on Whiterun, they asked to garrison troops again, however, this time some intelligence was shared regarding Ulfric's plans, resulting in the Legion forces under Legate Quentin Cipius being sent to Whiterun to defend it from the Stormcloak invasion.[14][15] 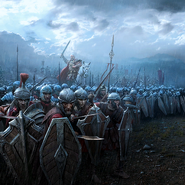 Tullius' Conscription.
Add a photo to this gallery

Retrieved from "https://elderscrolls.fandom.com/wiki/General_Tullius?oldid=3127576"
*Disclosure: Some of the links above are affiliate links, meaning, at no additional cost to you, Fandom will earn a commission if you click through and make a purchase. Community content is available under CC-BY-SA unless otherwise noted.