See below
Ghostgate is a location found in The Elder Scrolls III: Morrowind. It is a large building, part of a giant wall.

The Ghostgate provides the only ground entrance in and out of the Red Mountain Region, which is enclosed by the Ghostfence, a giant wall of magical energy, that was created by Vivec, Almalexia and Sotha Sil to protect the other regions of Vvardenfell from the Blight.[1] The Ghostgate, itself, consists of three sections. The Tower of Dusk, the Tower of Dawn, and the Ghostgate Temple, the latter is located above the passage that leads into the Red Mountain Region and it can only be accessed through the two towers, on each side. It, also, serves as barracks for the garrisons of Temple Ordinators and the Order of the Buoyant Armigers who are stationed here.

Outside, on the Ashlands side of the gate, there is an encampment with three bedrolls and a fire. There Zallit Assattadaishah and Tunipy Shamirbasour can be found.

"Here Vivec, Sotha Sil, and Almalexia used many soul gems to create the Ghostfence, an unwavering symbol of Dunmer pride."
―Description of the Ghostgate Shrine[src]

The Ghostgate is often used as a base for the pilgrims who wish to reach the nearby shrine to Vivec the Poet.[2] The shrine is just beyond the Ghostfence, to the northeast, into the Red Mountain Region. If a soul gem is offered to the shrine it will confer the Ghostgate Shrine Blessing.

It houses Nilvyn Drothan and Uvoo Llaren, a Priest and a Monk, respectively. The temple is made of a main room, where many shrines can be found.

The shrines have several effects to chose from:

In addition to these, they all have a unique effect:

It is one of the two main sections of the Ghostgate. It houses Ralyn Othravel, Faras Thirano a merchant enchanter and the healer Ulmiso Maloren. There is also a room for rent.

It is a living area, there is a locked room at the back where a guard is located, an Ebony Tower Shield, a Right and a Left Ebony Pauldron and two locked chests contain approximately a total of 100

can be found also.

It is the other main section of the building, there is a Smith, the publican Galore Salvi who sells drinks and can rent a bed and a Trader Fonas Retheran.

It is a living quarter, and as in the previous tower, the locked room contains the unique Amulet of Usheeja, the Shield of Wounds, a Helm of Wounding and three chests that contain all together about 160

Inside the Tower of Dawn. 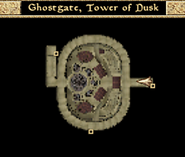