For other uses, see Giant.
For the female variant, see Giantess.

Giants are a race of large humanoids who inhabit Skyrim in The Elder Scrolls Online. They are more commonly seen in the more northern parts of the province, where they are known to herd mammoths.

They are generally peaceful creatures, unless approaching them or their mammoths.[1] If provoked, they wield clubs that have been known to swing humans "up to a league" away.[1]

They are known to appear in the following regions:

Concept art of a giant (middle) 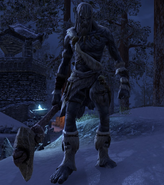 Giant, Wrothgar Variant
Add a photo to this gallery

Retrieved from "https://elderscrolls.fandom.com/wiki/Giant_(Online)?oldid=2922268"
*Disclosure: Some of the links above are affiliate links, meaning, at no additional cost to you, Fandom will earn a commission if you click through and make a purchase. Community content is available under CC-BY-SA unless otherwise noted.