For other uses, see Giant.

Giants are a race of large humanoids found in the wilderness of Skyrim and High Rock. Infamous for their colossal height and immense strength, giants share little civil interaction with humans or elves.

"Giants are generally peaceful creatures, so long as potential threats keep their distance... and leave their mammoths unharmed."
―Loading Screens[src]

Culturally, giants herd mammoths, processing their milk into cheese, complementing their omnivorous diet with the cooked meat of skeever. Seemingly nomadic, giants travel with their herds, setting camp across Skyrim and High Rock.

Giants stand between 11 and 12 feet (3.4m and 3.7m) tall, and are mostly humanoid in appearance; with thick skin, long, powerful limbs, large hands and feet, and thick greyish-brown hair decorated with braids and beads. Most giants have decorative scars carved into their chests, possibly serving as tribal or religious symbols. Their physical similarities with Orcs—jutting lower canines, tapered ears, and the presence of stumpy horns on the temples—serve as evidence of some loose relation to the Mer.

All giants encountered in-game are male, with wrinkled faces and long, gray-streaked beards. Female giants make no appearances. Whether this indicates a scarcity of female giants, or some other unexplained attribute of their social structure or anatomy, or simply due to gameplay limitations, remains unknown.

They arm themselves with crudely-made stone and wood clubs, and clothe themselves in fur pelts adorned with the bones of animals and humanoids, although many prefer a simple loincloth. They also herd mammoths for meat and milk, which they make into cheese.

The giants' diet seems to consist largely of meat and mammoth cheese, evidenced by their herding of mammoths and the presence of charred skeevers and other animals spit-roasting over their massive fires. They also appear to be partial to horses and wolves as the bodies of these animals are (less frequently) found on smaller, square-shaped logpiles that have remained unlit. Sabre cat corpses can be found in their camps as well.

Despite their primitive appearances, giants are moderately intelligent: they are able to fashion tools and clothes for themselves, herd mammoths, and harness fire for warmth. Giants can sometimes be heard "speaking" during combat, though their speech is deep and guttural, and consists of incomprehensible grunts and roars. There are no translations for any of the words they use, and they have no known written language. The only known giant who has dialogue, visible through the use of subtitles, is Karstaag the frost giant.

During "The Cursed Tribe," giant paintings can be seen outside Fallowstone Cave resembling their decorative scarification. Giants may also carve symbols into herded mammoth tusks. In the same quest, a shrine to Malacath is seen, decorated with patterns usually found at giant camps, as well as indications of sacrifice, which may indicate worship. The shrine is also guarded by the giant who carries Shagrol's Warhammer.

During the quest "A Night to Remember," the Dragonborn is tasked with recovering a goat they traded to a giant during their alcohol-laced adventures. This shows that giants are intelligent enough to understand the concept of a trade and even become angry when double-crossed after said trade. The aforementioned giant becomes hostile and aggressive when the Dragonborn steals back the goat they had traded to it.

Giants are nomadic creatures that herd mammoths for sustenance, and are wary of, but used to, the presence of other races. They only attack if attacked first, or if someone strays too close to their camps or herds - lone groups of giants on the move can be closely approached with only a low chance of hostility. This is in contrast to the contracts issued by Jarls, which state that the giant at a local named location has been harassing and attacking people and livestock. Due to a possible bug, sometimes they also appear to ignore the Dragonborn's presence altogether even if both are face to face with each other.

Mountain giants are often seen traveling with mammoths. These mammoths stay close to the giants' camps, and pouches of mammoth cheese are often found nearby, supporting the conclusion that the giants raise mammoths like livestock. Additionally, there is a giant herding a cow from the base of the path from Labyrinthian. The giant walks with the cow to Sleeping Tree Camp or another giant camp. After that, they stand still for hours.

Giants are usually only found in the snowy terrain of The Pale, the vast tundra of Whiterun, or the warmer parts of Eastmarch, where they can roam freely. Giants can be found in Falkreath Hold or Hjaalmarch as well, but they are usually only there to raid the player character's homestead.

There is no evidence that giants need to rest or sleep, as they are never seen doing so. Their camps rarely, if ever, contain bedding materials.

In some camps, giants have left a giant club lying on the ground. While the Dragonborn cannot equip it, certain followers possessing Two Handed weapon skills can.

Some farmers offer cows as a sacrifice to the giants in order to avoid attacks on livestock. The cows are painted with traditional markings so that the giants recognize them as peace offerings. However, giants have been known to kill these farmers and ignore the peace offerings.

An angry man named Ennis, mentions that the Dragonborn sold his goat to a giant named Grok in the quest "A Night to Remember."

If Hearthfire is installed, it becomes evident that Giants can and will attack homesteads, often killing people and animals. The exact cause of the attacks is unknown.

Giants can be found in the following locations: 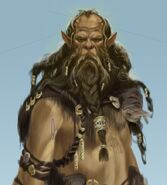 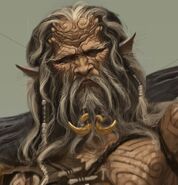 Deutsch Español Français Bahasa Indonesia Italiano Nederlands Polski Русский ไทย Українська
*Disclosure: Some of the links above are affiliate links, meaning, at no additional cost to you, Fandom will earn a commission if you click through and make a purchase. Community content is available under CC-BY-SA unless otherwise noted.
Advertisement