For other uses, see Goat.

Goats are docile animals that appear in The Elder Scrolls Online. There is also a variation called the Timberstand Goat, located nearby Kynesgrove, that does not appear to serve any purpose other than to exist, unless Heggvir Sun-Hair's option is chosen during the quest "Merriment and Mystery." During "Alasan's Plot" a unique invincible goat is encountered that has 400 health points and can be milked. 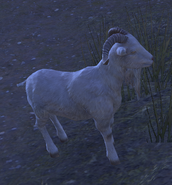 Different horns
Add a photo to this gallery

Retrieved from "https://elderscrolls.fandom.com/wiki/Goat_(Online)?oldid=3078341"
*Disclosure: Some of the links above are affiliate links, meaning, at no additional cost to you, Fandom will earn a commission if you click through and make a purchase. Community content is available under CC-BY-SA unless otherwise noted.