"You heard of Goblin Jim's Cave'? It's a big one. It's a long walk due north of Skingrad, in the Imperial Reserve... a long way from civilization."
―Fadus Calidius[src]

Goblin Jim's Cave is a large cave north of Skingrad. Talking to people in Skingrad reveals it on the map, especially people in the Fighters Guild. Other than Goblin Jim himself, there isn't anything remarkable about the cave, meaning standard leveled loot, other than the book Night Falls on Sentinel, which increases Blunt by 1. 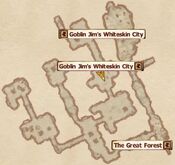 Goblin Jim's Pantry
Add a photo to this gallery

Retrieved from "https://elderscrolls.fandom.com/wiki/Goblin_Jim%27s_Cave?oldid=2674346"
*Disclosure: Some of the links above are affiliate links, meaning, at no additional cost to you, Fandom will earn a commission if you click through and make a purchase. Community content is available under CC-BY-SA unless otherwise noted.