Golden Saints are Daedric humanoids that appear as men and half-clad women in golden armor and winged helmets, with golden-hued skin.[2] Males and females both have golden hair, and golden teeth with Sheogorath's symbol on each one.[3]

Golden Saints tend to be very haughty, severe, and have short temper as they view everyone in the Shivering Isles as inferior to them and view themselves as their lord's most perfect creation.[1] They have a deep rivalry with the Dark Seducers as each race often battling for their lord Sheogorath's praise.[4]

The females of the species far outrank the males, and as such all males are looked down upon.[5] Because of this, even males look down upon themselves. In terms of beliefs, the Golden Saints worship the Wellspring of the Aureal, where the souls of dead Golden Saints are brought back to life.[6]

When in combat, Golden Saints use a variety of weapons, such as swords, axes, etc. They also use some destruction spells.[7] 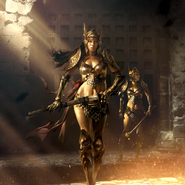 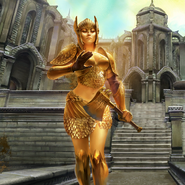 Saint of Bliss in Legends. 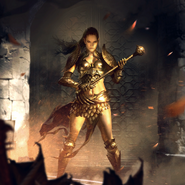