King Gortwog gro-Nagorm is the king of the Third Orsinium, and the leader of the Orsimer people during the late Third Era. Since his ascension to the throne, he has worked hard to make his people be accepted as citizens of the Empire. He is also strongly against Necromancy.[1]

In 3E 399, he managed to win the Orsinium Area after a duel with Lord Bowyn, with the help of an Orc named Tunner.[2] After he gained the area,[3] slowly but surely he learned how to play the game of politics cleverly. He managed to retrieve a copy of the Real Barenziah, a book that was critical of the royal family of Daggerfall and the Septim bloodline.

During the War for Betony, through his spies, he found out that Wayrest was sending assassins to assassinate King Lysandus of Daggerfall. He thought that by preventing this he could gain the friendship of the most powerful kingdom in the Iliac Bay region and also the Direnni Clan on the Isle of Balfiera. Unfortunately, his warriors could not stop the assassins and King Lysandus was slain.

He also gained the letter that Uriel Septim VII sent to the Queen of Daggerfall. The letter was critical, as it stated the resurfacing of the Numidium, a Dwemer construct. The letter was finally retrieved from Gortwog by an agent of Uriel Septim VII in the depths of the dungeon of Orsinium, but the contents of the letter had already been spreading among the rulers of the Iliac Bay region and the underground factions as well. It was obvious that Gortwog had traded this information.[4]

Gortwog is one of the wielders of the Dwemer weapon Numidium. He is one of the seven retrievers of the Totem of Tiber Septim, a tool for controlling the Dwemer construct. Originally there was only one Totem, but a strange time warping effect known as the Warp in the West made all seven parties of the Iliac Bay receive the Totem.

Through the use of the Totem, Gortwog eventually got the Empire to accept the Orcs as equally as other races. Because of Gortwog, Orcs now enjoy all the privileges of normal Imperial citizens, and some have been accepted as guards in the City Watches and soldiers in the Imperial Legion.[5] 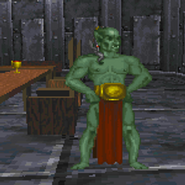 Retrieved from "https://elderscrolls.fandom.com/wiki/Gortwog_gro-Nagorm_(Daggerfall)?oldid=2732499"
*Disclosure: Some of the links above are affiliate links, meaning, at no additional cost to you, Fandom will earn a commission if you click through and make a purchase. Community content is available under CC-BY-SA unless otherwise noted.
FandomShop Fandom IG GalaxyQuest